Is Tehran taking advantage of coronavirus pandemic to continue its nuclear pursuit? 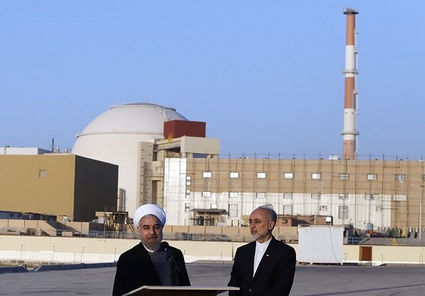 (JNS) - Despite facing one of the world's worst coronavirus outbreaks, Iran appears to be continuing its pursuit of nuclear weapons, as well as its aggressive regional behavior. Iran has already acknowledged that it has increased its uranium stockpile, which now stands at more than 1,000 kilograms, and is also using a greater number of advanced centrifuges for enrichment. Based on these developments, experts believe that Iran's breakout time to produce a nuclear weapon may have now been reduced to just a matter of months.

He added that Israel is counting on the Trump administration, "hoping that it will put pressure on Iran in this regard."

However, Zisser posited, there is speculation in Israel that Iran's actions are also intended to put pressure on the international community to ease the sanctions.

In addition to its nuclear ambitions, Iran has also engaged in attacks on American forces in the Middle East. Earlier this week, an Iranian-backed Iraqi militia, Kata'ib Hezbollah (Hezbollah Brigades), is believed to have fired a barrage of rockets into the Camp Taji air base north of the Iraqi capital of Baghdad. The attack killed two U.S. troops and a British service member, while wounding 14 others. A day later, U.S. forces in Iraq hit back, carrying out airstrikes against Kata'ib Hezbollah.

Yoel Guzansky, a senior researcher at the Institute for National Security Studies, feels that it is necessary to ring the alarm bells on Iran's likely clandestine efforts to reach nuclear capability as soon as possible, telling JNS "we should all be paying attention to what Iran is doing, especially now."

The question, according to Guzansky, is what will Israel do the second it definitely knows that Iran is sneaking under the coronavirus umbrella to pursue nefarious nuclear activities?

The coronavirus (COVID-19) is a double-edged sword, according to Guzansky. On the one hand, Iran is also dealing with it and remains under grave pressure from within to focus on containing it. Mohammad Mirmohammadi, an adviser to Iranian Supreme Leader Ayatollah Ali Khamenei, has died from the virus and so has Lt. Gen. Nasser Sha'abani, a member of Iran's Islamic Revolutionary Guard Corps. Hundreds of Iranian civilians have succumbed as well (nearly 1,000 as of this writing) with many more thousands diagnosed as carriers.

Iran's leaders might be focused on dealing with the coronavirus, but on the flip side, they might also be taking advantage of it, and with the world's focus temporarily diverted, working secretly to advance their efforts to achieve nuclear capability.

Indeed, earlier this month, IAEA director general Rafael Mariano Grossi called on Iran to cooperate immediately and fully with the IAEA, and provide prompt access to locations which it has refused to let inspectors visit.

Clearly, Iran has something to hide.

For this reason, said Guzansky, Israel needs to "strengthen its intelligence oversight."

'We need to keep a strong eye on Iran'

According to a recent report by the Jerusalem Institute for Strategy and Security, "in early 2018 Israeli intelligence acquired Iran's 'atomic archive.' Despite the promises of 'robust transparency,' we now know that in the months following the JCPOA's conclusion, Iran accelerated its efforts to collect, organize and hide this huge trove of materials detailing its extensive work to develop and produce nuclear weapons. The discovery of the archive laid bare both Iran's long-term intentions and the JCPOA's many flaws."

And that was two years ago. Israel has every reason to believe that Iran has only doubled its efforts since then to achieve nuclear capability.

"We should accelerate our means of intelligence so that we will know better what they are doing," said Guzansky. "We also need to be in close contact with the Americans," he added, to ensure that we are "on the same page."

But questions remain: What happens if and when further action must be taken to stop Iran? What will the United States do? What can Israel expect from the United States? Where do the Americans stand on this?

These are issues that must be addressed, stressed Guzansky.

"Countries today are under severe economic strain," he noted.

"For this reason," he said, "specifically, at this time, we need to keep a strong eye on Iran. We should let Iran know we are scrutinizing them on everything."