YouTube: How the Jewish Pavilion is fulfilling its mission 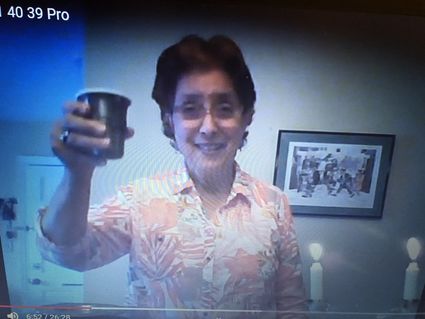 A screenshot from the video Susan Bernstein made of a Kabbalat Shabbat service.

It's been almost three months. That's right, almost three months since the Jewish Pavilion program directors and volunteers have been actually able to go and be with its seniors. Purim came and went with celebrations canceled and everyone thought or hoped that by Passover they would be with the seniors. It wasn't long before it was realized that they weren't going to be with them for Passover nor were they sure when they would be able to visit with the seniors again. The Pavilion's mission is hands-on and the program directors have had to think outside of the box. They wrote letters and asked the community to send letters. Program director Susan Bernstein along with her volunteers started a call-campaign reaching out - and now Bernstein is on YouTube.

Social distancing has brought about many changes and challenges. Staying true to its mission, the upcoming holidays, and what can be done, is just what Bernstein and Nancy Ludin, Jewish Pavilion CEO, were discussing when they got an idea. Synagogues are live streaming, which wouldn't be practical for the Pavilion, but what about a Kabbalat Shabbat service video? A video is such a great idea and a great way to help the seniors stay connected to their community and culture. The question was, how to get it to everyone. And just like that Bernstein got a YouTube channel.

It really wasn't "just like that" because this is new territory. Bernstein opened her own channel and went to work on her video. It was trial and error. She knew that she wanted the service to have certain elements and using her home computer to record herself, she did a Kabbalat Shabbat service.

As Bernstein inaugurates Shabbat with the lightening of the candles, one feels like he or she are right there with her. Throughout the service she talks about how all families have different traditions and makes it personal with her own traditions. Her goal is to make sure that everyone participating feels included and remembered.

Unfortunately, the one thing not found in the Kabbalat Shabbat service is Bernstein's guitar. She usually plays the guitar during services but she found that it sounded too tinny and decided not to include it. After trying different methods and being happy with the results, she got in touch with her facilities to let them know about the video.

The Jewish Pavilion senior all have different levels of technology skills and resources. The elder-care facilities have different resources for their residents to view the services. Bernstein's mother is a resident of Cascade Heights and they are providing an iPad for her to watch the video. Other facilities have an in-house channel that will air it at Bernstein's regularly scheduled days and time. Some seniors have their own computers and will be able to watch that way. These are changing times and the Jewish Pavilion is working very hard to make the changes necessary to stay true to the Jewish Pavilion's mission.

Recently, a resident at Allegro called Bernstein to say they had just finished showing the video with positive reviews. This is something they will continue to show until they can have her back in person at the facility. She thanked Bernstein for the video and let her know how much it meant to her.

The Sabbath helps to anchor us, especially in these times when each day seems to run into the next making it hard to remember the day of the week. Shabbat shalom.