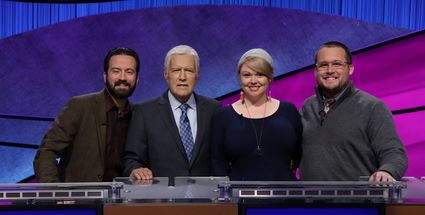 Meggie Kwait, a Jewish day school teacher from New York City, won $50,000 on the recent "Jeopardy!" educators tournament. She is seen with host Alex Trebek and the other two finalists.

(JTA) - Astute viewers could find plenty of signs during the recent "Jeopardy!" Teachers Tournament that one leading contestant had some Jewish bona fides.

There was the fact that Meggie Kwait teaches at Beit Rabban Day School, a Jewish school on Manhattan's Upper West Side. There was her covered hair, rare among game-show contestants but more common among observant Jewish women. And then there was her bet for the final question on a day when she was so far ahead she couldn't lose.

"Yes, I wagered $18," Kwait told the Jewish Telegraphic Agency. "That was when all the Jews realized I was Jew...