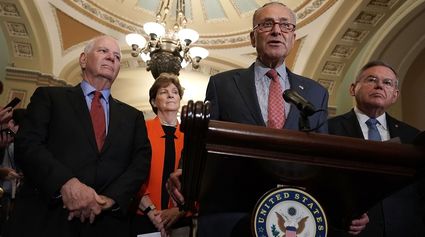 Senate Minority Leader Chuck Schumer, at mic, speaks at a news briefing at the Capitol, July 17, 2018. Left to right in the background are Sens. Ben Cardin, Jeanne Shaheen and Robert Menendez.

WASHINGTON (JTA) - Three of Israel's most stalwart boosters among Democrats in Congress are warning the country against annexing parts of the West Bank.

Sen. Chuck Schumer of New York, the minority leader, and Sens. Ben Cardin of Maryland and Robert Menendez of New Jersey released a statement Friday saying they were "compelled to express opposition to the proposed unilateral annexation of territory in the West Bank."

The three senators are only the latest Democrats in Congress to warn Israel against the proposed annexation, but they may be the most significant, not only because Schumer lead...