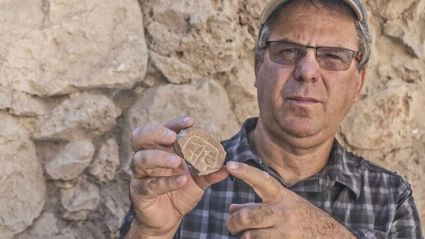 Professor Yuval Gadot from Tel Aviv University with the seal.

(JNS) - A double stamp impression on a bulla and a seal made of used pottery shreds discovered in the City of David may indicate that despite the plight of Jerusalem after the destruction of the First Temple, efforts were made to restore the stature of the administrative authorities.

The archaeological evidence revealed in excavations by the Israel Antiquities Authority and Tel Aviv University in the Givati Parking Lot Excavation of the City of David may provide evidence of the restoration of the city in the period of Ezra and Nehemiah.

The seal impression, bullae, were small pieces of clay...