In Germany, several churches have perverse anti-Semitic sculptures from the Middle Ages - can one man get them taken down? 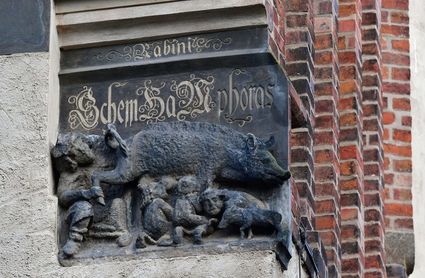 BERLIN (JTA) - They date back to the late Middle Ages and irritate to this day: The Judensau (literally "Jewish sow") is a Christian folk image that depicts Jews sucking on the teats or peering into the anus of a pig.

Mostly found in the form of reliefs or gargoyles on the exterior of German churches, some of them major historical landmarks, the images have been the subject of increasing public debate in recent years. And now Germany's highest court will weigh in on the matter when it hears the case of a Jewish man who says one such sculpture insults him personally.