'Whose Holy Land?' - an excerpt 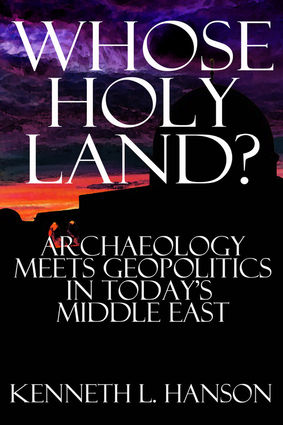 A tiny bell. A tiny golden bell. Might this be the "signal" for which a small sect of faithful Israelites have waited for two millennia, declaring that the time is ripe for rebuilding the ruined temple of Jerusalem? By contrast might it be a "provocation," as Palestinian sources claim, in the ongoing conflict over who owns the most disputed piece of real estate on earth? According to Palestinian television news, "Israeli sources said that a gold bell had been found in a tunnel, belonging to what they call the Second Temple Period. This once again highlights the efforts of the Israeli side to forge the history of the holy city."

Forge history? Is that the sinister campaign Israel's biblical archaeologists are pursuing? Has a dark conspiracy been hatched, to take control of Muslim holy sites, occupying Islamic holy ground, and build in their place a new Jewish temple? If so, World War III might be expected to arrive much sooner than previously imagined. In any case, there can be no doubt that archaeology is becoming one more weapon in today's ongoing Arab-Israeli conflict.

How could a little bell produce such rancor, when its discovery should have been met with awe and wonder? Its design is exquisite, perfectly preserved and untarnished after two thousand years. Found in the remains of a drainage tunnel dating to the first century of the Common Era (the entrance of which lay just west of the famed Western Wall of the Temple Mount), the excavation managers declared, "It appears the bell was sewn on the garment of a man of high standing in Jerusalem at the end of the Second Temple period." The Bible describes the bluish tunic of the temple's high priest as being festooned along its hem with seventy-two gold bells, interspersed with woven pomegranates. Given the location of this find and the fact that it perfectly matches the biblical description, it is not beyond the realm of possibility that this minuscule artifact may have been worn by the man who presided over ancient Jerusalem's "Holy House." Even the miniature clapper remains in place, and when shaken, it still produces a faint ringing sound. In short order audio files began appearing on the internet, beckoning the listener with "a voice message from the holy temple."

As amazing a find as it is, the little gold bell is just the most recent episode in a long saga of archeological discoveries that have confirmed the biblical descriptions of Jewish history. We are about to travel back in time and explore the most significant among them, along with their discoverers, and with each one of them, we will also present, not only the "facts on the ground," but the science that underlies them and the inevitable criticism from the Palestinians and their advocates in the media. Sadly, in today's geopolitical climate such voices are as much a part of the story as the discoveries themselves. A suitable place to begin is in a sleepy suburb in East Jerusalem, the name and significance of which is of little interest to most -Silwan.

With a population of some forty thousand Arabs, it is, given the tensions of the region, much less sleepy and much more confrontational than might be imagined. This is because Silwan is the location of a major archaeological site, advertised as the City of David (Ir David in Hebrew). It is part of a natural rocky outcropping extending southward from a ridge-like area known as the Ophel, that in turn connects with the south end of the Temple Mount. Long ago, in the twelfth century, B.C.E., there was a city here called Jebus, after the Jebusite tribe of Canaanites - those conquered by the biblical hero Joshua. According to the Bible, the city remained in Jebusite hands until it was taken by King David, somewhere around the tenth century B.C.E. Such was the genesis of the city that is today known as Jerusalem.

All of this, however, is incessantly undermined by Palestinian propagandists. David and his memory are minimized, if not erased from history. Moreover, excuses are being made for the apparent lack of Palestinian archaeology, while Jewish archaeology proceeds at fever-pitch. In a television interview for Al-Jazeera, archaeologist Mahmoud Hawari of Bir Zeit University declared:

The reason Palestinians are not as interested in archaeology as Israelis is because we don't have to prove that we were here two thousand years ago.

Put simply, it is so obvious that Palestinian Arabs were living, some two millennia ago, in the land that today comprises the Jewish state, that they are disinterested in archaeological attempts to prove it. One might, however, suggest another scenario. It is painfully evident that today's Palestinian Arabs can trace their residence in the land no further back than the Muslim conquest of 634 of the Common Era. The great majority arrived only within the last century or so. To link themselves to the Nabatean Arabs who lived there in antiquity, and who were, after all, pagans, not Muslims, is at best a vain exercise. Could it be that modern Palestinians simply have nothing that old for which to dig?

Jerusalem is today as it has always been, a focal point of geopolitics. From the days in which David first vanquished the Jebusites it has been attacked fifty-two times, captured and recaptured forty-four times, besieged twenty-three times, and destroyed twice. Ironically, we would be hard-pressed to find any place on earth more prone to violence and bloodshed than this "City of Peace." The fact that that subterranean archaeology is on the front line in today's conflict is but a new wrinkle in the ongoing battle for David. For better or for worse, the diggers will continue to dig. Israel's greatest modern poet, the late Yehuda Amichai, summed it up:

Jerusalem is like an Atlantis that sank into the sea

everything there is submerged and sunken

This is not the heavenly Jerusalem but the one down below,

way down below. And from the sea floor they dredge up ruined walls

and fragments of faiths, like rust-covered vessels from sunken

prophecy ships. That's not rust, it's blood that has never dried.