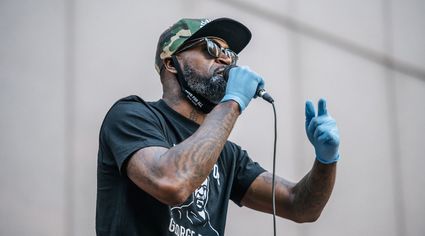 Stephen Jackson speaks at a rally for police reform and justice for George Floyd in Minneapolis, June 11, 2020.

(JTA) - NFL wide receiver DeSean Jackson unleashed an uproar with his tweets over the weekend that featured quotes dubiously attributed to Adolf Hitler - including claims that "white Jews" will work to "blackmail" and "extort" America - and that the Nazi leader "was right."

Now his most prominent defender - former NBA player-turned-podcaster and Black Lives Matter activist Stephen Jackson (no relation) - is facing his own wave of high-profile criticism.

Stephen Jackson took center stage in the controversy after saying that DeSean Jackson was "speaking the truth." He proceeded to add several...