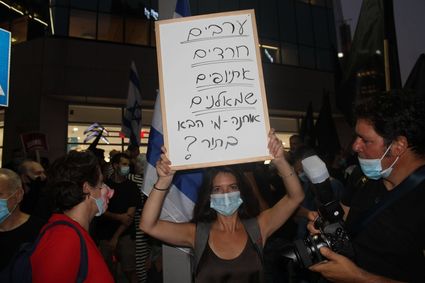 Eliana Barbel at the protest in Tel Aviv holding a sign that reads: "Arabs, haredim, Ethiopians, lefties. Ohana, who is next in line?"

TEL AVIV (JTA) - Noam Ofer might have been an unlikely candidate to join Israel's burgeoning protest movement. At 76, he is older than most of the people who have taken to the streets in recent weeks to protest the government's handling of the coronavirus crisis. He also doesn't share the political views of many of the protesters.

But Ofer was there anyway on Tuesday evening marching outside the Tel Aviv home of Israel's internal security minister in charge of law enforcement, Amir Ohana, who was caught on tape pressuring a senior police official to ban demonstrations against Prime Minister...