The BDS-BLM alignment: Implications for Israel and Diaspora Jewry 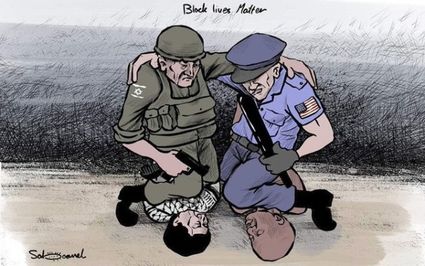 The cartoon depicts what the "Justice for Black Lives" petition reads: "the knee-to-neck choke-hold that [Derek] Chauvin used to murder George Floyd has been used and perfected to torture Palestinians by Israeli occupation forces through 72 years of ethnic cleansing and dispossession."

(JCPA via JNS) - The murder of George Floyd in Minneapolis triggered the most widespread racially charged protests in the United States and Europe since the 1960s. International protests over Floyd's death, led by the Black Lives Matter movement, have generated expressions of sympathy and support from Western prime ministers, legislators, law-enforcement officials and local government. Prominent members of the U.S. House of Representatives "took a knee" in a historically unprecedented public display of solidarity for any civil- or human-rights protest movement.