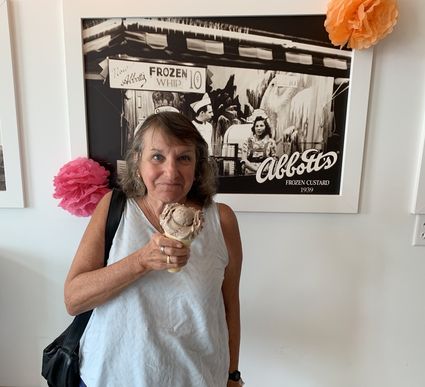 How will I celebrate a milestone birthday during the pandemic? That hoped-for week away with my family is out. A party at my home is out. Heck, my husband, Larry, and I can't even head to my favorite restaurant and indulge in a filet mignon and my free birthday brownie sundae. But there is a silver lining. An Abbotts frozen custard stand is less than 33 miles away from our Florida home.

The history of one of my culinary favorites began in 1902 when a young and enthusiastic Arthur Abbott traveled the Eastern seaboard with summer carnivals. He eventually found his way to Rochester, New York, where opened a stand across the street from Charlotte Beach on the shores of Lake Ontario and near a bustling amusement park.

According to Abbott's website, as word of his frozen concoction spread, people lined up from morning to night. From his newfound success, Arthur was able to buy and train his own racehorses. When he struck it rich after Blue Man won the Preakness in 1952, Abbott, then in his 70s, retired in 1957 and turned over his scoops to fellow frozen custard lovers Lenny and Tibby Schreiber. For many years, Tibby's parents owned a kosher meat market in what used to be during the 1930s the heart of the Jewish community on Joseph Avenue in Rochester. The franchise is now run by the Schreibers' daughter, Gail Drew, and her family. To this day, Abbott's supports the Tibby Schreiber Scholarship at the Jewish Home of Rochester for the children of employees of the skilled nursing home who are heading off to college.

Brenden Drew grew up in the family business where he started taking out the trash and washing dishes. He now is responsible for business development and franchising. "Every day it is an honor and a privilege to help grow the family business," Brenden said. "Our family loves supporting our communities and making each one of our guests happy and so do each one of our local owners who truly live the brand."

It took us a few more years to discover Abbotts. In the early 1990s, Larry and daughter Julie went to Western New York for a track and field competition. They spent the night before the race with Larry's sister and her husband, who lived in Rochester. They grabbed dinner on Charlotte's Beach, followed by dessert at Abbott's.

Larry was hooked from the first lick of his chocolate almond cone and soon introduced it to the rest of us. Everyone who knows me knows how much I love ice cream. But Abbott's chocolate almond frozen custard is in a class by itself. The chocolate custard is rich and smooth and creamy and delicious. What makes it outstanding are the roughly chopped roasted almonds that are stuffed into the custard. As one reviewer on Yelp raved, "It is like sex in frozen form!"

Whenever we went to Rochester, we made sure Abbott's was on our agenda. Fortunately, as our son, Adam, spent four years at University of Rochester, so we had plenty of chances to make a stop when we were there.

Sometimes once was not enough. In 2003, Larry and I went to a wedding that was held in a church in Rochester. On the way to the reception, Larry and I stopped at Abbott's for a pre-dinner cone. The next day, we went with the bride's parents to another Abbott's for a second helping. They knew how much we loved this stuff. When Larry had surgery on a torn ACL a couple of years later, they had the company ship out a couple of quarts to him. He graciously shared it with me.

At this point, we thought Abbott's was only located in Rochester. In 2012, however, Larry and I were in Naples, Florida, strolling down Fifth Avenue, when Larry began running down the street. "Come on! Come on! I have a surprise for you!" And there in front of us was an Abbott's frozen custard! Yep! Time for another chocolate almond cone.

The Naples franchise closed. Thankfully, another one of Larry's sisters and her husband spend their winters in Vero Beach, and every time we visit them, we hit Abbott's. They don't even have to be there. We celebrated Larry's 70th birthday by going to a beach farther down the coast and stopped at Abbott's on the way home.

Vero Beach is 100 miles away, not conducive to regular visits. And we don't get to Rochester very often. So imagine our joy in discovering that an Abbott's opened up in Winter Garden, only 37 miles up the road. We celebrated Father's Day 2020 with our first visit. It was almost as wonderful as we imagined, but we think they didn't hear our request for chocolate ALMOND, as we realized halfway through our cones that the familiar crunch was missing. Two days later, we had to get a bike tire fixed, and we were only 16 miles away from Abbott's. So what is a thirty-two mile bike-ride detour for the love of Abbott's? And this time we not only got plenty of almonds, but the size small was bigger than the previous Sunday's medium. Heaven!!

We made our third bike trip up a couple of weeks later. Another bike tire blew, and did another detour. I am sure we will squeeze another visit before my Labor Day weekend birthday. We are running out of bike tires, but we can find another reason.

When we make our trip up for my birthday cone, I will pack a cooler and plenty of ice and we will bring extra home, including a quart for friends in our community who previously lived in Rochester. It may not be the celebration for which I hoped to kick off my eighth decade. But it's a sweet start!