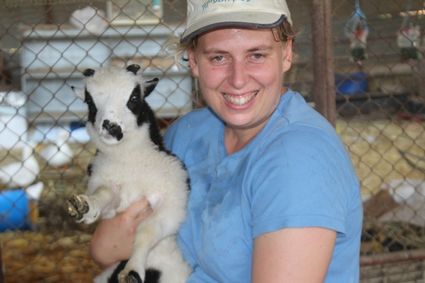 Jenna Lewinsky with one of her beloved Jacob's Sheep.

Over the past century, Jews and Christians have celebrated the return of the Jewish people to the Biblical Land of Israel, a restoration prophetic proportion. More recently, this return was accompanied by some four-legged friends representing Israel's 3000-year history in the Judean mountains.

This is the modern story of Jacob's Sheep.

Jacob's Sheep are an heirloom (unaltered) breed of ancient sheep, mentioned in Genesis 30. They originated with Jacob the Patriarch working for his father in law, Laban. The sheep are distinct in that they are spotted and speckled, as mentioned in the Bible, and have as many as six horns.

When the Jews were exiled to Babylon, their flocks were also dispersed. Like Israel, Jacob's Sheep spread out around the world: throughout the Middle East, to Spain, and as far as China. In the 17th century Jacob's Sheep arrived in Britain, and from there, the sheep migrated to North America. Now, they have returned home, to the Land of Israel.

The restoration of Jacob's Sheep is a labor of love of Jenna Lewinsky who acquired a flock of 119 sheep while in Canada. She dealt with bureaucracy of importing livestock to Israel for which there was no precedent. As much as she met importing resistance, she also was encouraged by the outpouring of support recognizing the sheep's role in prophesy.

Isaiah explained that the return of the People of Israel to their Land, is comparable to the return of sheep (Isaiah 49). Jeremiah lamented, "Look at those who are coming from the North. Where was the flock that was given you, the sheep of your glory." (Jeremiah 13:20). Both Jeremiah and Ezekiel prophesied a return of the lost sheep, the nation of Israel, as vital to the final redemption.

Jenna explains that Jacob sheep's first shepherdess was the matriarch Rachel, Jacob's beloved. It's no coincidence that Jacob's Sheep have returned home, in the Judean mountains within sight of Rachel's tomb.

Jenna is meticulous about naming the flock. The patriarch is Isaac. The matriarch is Kallah, "bride" in Hebrew.

"I have a few ways in which I name them. Sometimes they are born with markings that resemble a Hebrew letter, so I name the sheep with a name that starts with that letter. Other times I look into those cute lamb's eyes and a name just comes to me. All the sheep have a Hebrew name and each knows his/her name and responds when he/she is called," Jenna continues with that sense of connection she has with each and every sheep in the herd, though some are somewhat more special to her than others, one special one is Rachel.

"One day, I turned on my computer and saw a donation notification that read: 'Hi, I am from Florida and just loved Rachel (the sheep) in the photos online. Here is $30 dollars to buy Rachel a bag of grain." Jenna mentions this generosity from a stranger who followed her special relationship with Rachel and the significance of that. Jenna has allowed donors of higher amounts to name a lamb.

The labor of love comes with a price. Jenna has been blessed by the support of many Jews and Christians who are touched by her commitment and the ability to be part of a once in a lifetime opportunity of biblical proportion. For instance, just bringing the sheep to Israel cost $80,000. She has a vision of making the farm self-sufficient, growing and selling produce and selling the wool she sheers.

Today, Jenna and her flock reside on a pristine 100-acre mountain top farm in the Judean Mountains, just south of Jerusalem. The sheep are kept happy and protected in a weatherproof shelter. Jenna and her baby son, David, live in a small caravan without running water or electricity. To say she lives modestly puts Little House on the Prairie to shame.

While not being materialistic, Jenna does have needs including an upgraded caravan home that has sanitation, shower, and insulation from the elements.

The sheep need grain, hay, water, and veterinary care. Miraculously, none of the sheep died in transit, but shortly after arriving home the herd contracted Bluetongue Disease, an insect born virus. 48 sheep died in the one month, leaving slightly more than half the original flock. Incredibly, none of the lambs died. They are often the most vulnerable.

The specific location of Jenna's farm has rich Biblical significance. The site is named Migdal Eder, "the tower of the flock." It is adjacent to Efrat and Bethlehem, described in the Bible as near the burial place of Rachel. "Thus, Rachel died. She was buried on the road to Efrat-now Bethlehem. Over her grave Yaakov set up a pillar; it is the pillar at Rachel's grave to this day. Yisrael journeyed on, and pitched his tent beyond Migdal-Eder." (Genesis 35:19-21)

Migdal Eder is also identified by the Prophet Micah as the place from which King David's dynasty will be reestablished. Indeed, these are the same mountains in which David shepherded his flock.

"When I first visited the site, I looked out and, in the distance, I saw Jerusalem. I felt like we were finally home. The sheep receive blessing from the Holy City."

According to Jewish tradition, Jacob buried Rachel on the road leading to Bethlehem, not even taking her to the closest village. The reason for this was that he foresaw that when the Jews would be exiled, they would pass by this road and be comforted by her. Jeremiah prophesied Rachel arising from her grave and crying for her children, until the they will be returned to their Land. Today, Rachel must have a smile on her face seeing not only that her children, but the sheep that she protected, have returned.

Jenna and Jacob's Sheep have been blessed by and welcome volunteers from around the world. While she's started modestly, Jenna's vision is great. For those who cannot volunteer in person and want to be part of this, donations are graciously accepted and needed just to maintain the basics, as well as to build out the farm in ways that it will become self-sufficient.