China and Iran reach a new stage in their strategic partnership 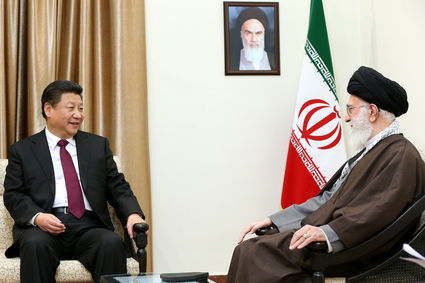 (BESA Center via JNS) - In recent years, the People's Republic of China and the Islamic Republic of Iran have expressed a common desire to formalize their comprehensive strategic partnership (which has not yet entered into force) by cooperating in such areas as trade, energy and production capacity. Their willingness to work together arises from historical ties tracing back to the ancient Silk Road, as well as from complementary economic and political interests. A strategic partnership between Tehran and Beijing constitutes a win for both sets of national interests.

In January 2016, shortly after the Joint Comprehensive Plan of Action nuclear pact went into effect, Chinese President Xi Jinping made a visit to Iran during which the two states agreed to establish the partnership. The agreement was essentially a statement of intent, as while a joint statement was issued on Sept. 23, 2016, about the two nations' comprehensive strategic partnership, no official agreement yet exists.

The partnership encompasses five main domains: politics; executive cooperation; human and cultural concerns; judiciary, security and defense; and regional and international concerns. The sides agreed to develop a roadmap for the partnership for the next 25 years and to increase trade to $600 billion over the next 10 years. None of the programs discussed in the documents is fully operational as yet.

In May 2018, U.S. President Donald Trump announced that the United States was withdrawing from the JCPOA. This set in motion the reimposition of secondary sanctions on Iran that resumed in full in November of that year. While Washington's moves complicated the China-Iran comprehensive strategic partnership somewhat, Beijing said it would maintain normal economic and trade exchanges with Tehran despite Trump's actions.

In February 2019, President Xi hosted an Iranian delegation that included Tehran's foreign minister, Mohammad Javad Zarif, the oil minister, and Parliament Speaker Ali Larijani. Xi spoke to Larijani about the enduring friendship between the two countries and said Beijing's determination to develop their comprehensive strategic partnership remained unchanged despite changes in the global and regional arenas. In May 2019, during a meeting with Zarif in Beijing, Chinese State Councilor and Foreign Minister Wang Yi said China "supports the Iranian side to safeguard its legitimate rights and interests."

In August 2019, Zarif presented a road map to his Chinese counterpart that would update the China-Iran comprehensive strategic partnership via a 25-year deal involving a $400 billion Chinese investment in Iran. Most of the key specifics of this arrangement were not released to the public, even though they represent a potentially material shift in the global balance of the oil and gas sector.

According to Petroleum Economist, the central pillar of the new plan is that China will invest $280 billion in Iran's oil, gas and petrochemicals sectors. This amount might be front-loaded in the first five-year period of the deal with the understanding that further amounts will be made available in every subsequent five-year period, subject to both parties' agreement. There will be another $120 billion Chinese investment in upgrading Iran's transport and manufacturing infrastructure, which again might be front-loaded and then added to in each subsequent five-year period.

More importantly, the agreement will deepen Chinese-Iranian military cooperation through joint training and exercises, joint research and weapons development, and intelligence sharing to fight terrorism, drug and human trafficking and cross-border crime. Additionally, China will be able to buy any oil, gas, and petrochemicals products at a minimum guaranteed discount of 12 percent to the six-month rolling low price of comparable benchmark products, plus another six to eight percent of that metric for risk-adjusted compensation.

Chinese Foreign Ministry spokesperson Geng Shuang has neither confirmed the deal nor offered any details. In fact, he claims he is "not aware" of it and "[doesn't] know where you got such information." What he is willing to share is that "China and Iran enjoy friendly relations, and our two countries conduct friendly and mutually beneficial cooperation in various fields within the framework of international law." For his part, Iranian Foreign Minister Zarif said this month to Iranian lawmakers that "there is nothing to hide about the deal. Every stage has been transparent, and once it is finalized, the details will be made public."

According to Tehran, the draft of the roadmap-which was in the works for four years-was approved by the Iranian regime in June 2020. The specific content, however, remains open to heated debate and speculation. If the draft of the roadmap is approved by the Iranian parliament, it will represent a serious affront to the Trump administration's policy of isolating Iran economically.

Iran has traditionally looked westward toward Europe for trade and investment partners. Why is it looking eastward now? There are several reasons.

First, more and more of the frustrated European countries that opposed the Trump administration's policy toward Iran have nevertheless quietly withdrawn from the kinds of deals the JCPOA once promised. To Iran's leadership, a strategic partnership with China would protect Tehran's interests on the international level.

Second, the reimposition of sanctions on Iran, including the threat of cutting off access to the international banking system for any company that does business with Tehran, is suffocating the local economy by scaring away badly needed foreign trade and investment. The deal with China is particularly important for Iran's energy sector, which needs to attract a $134 billion investment in the upstream oil sector and an additional $52 billion in the petrochemicals industry. According to China Global Investment Tracker, Beijing's investment and construction in Iran's weak energy industry exceeded $11.1 billion in the 2005-2019 period.

Third, the new stage in the China-Iran comprehensive strategic partnership could point to the nations' changing strategic calculus in the post-JCPOA era. Slowly but surely, China and Iran, along with Pakistan and possibly Iraq, Syria and Lebanon, are forming an axis that could disrupt the regional balance of power and vastly extend China's influence in the Middle East.

According to the draft agreement, China will gain access to port facilities in Iran, including two along the coast of the Sea of Oman. The one at Jask-which lies just outside the Strait of Hormuz, the entrance to the Persian Gulf-would give the Chinese a strategic vantage point on the waters through which much of the world's oil moves. That passage is of critical strategic importance to Washington, whose Fifth Fleet is headquartered in nearby Bahrain.

Fourth, in the coronavirus era, with the United States reeling from the recession as a result of COVID-19 and increasingly isolated internationally, China senses American weakness. The draft agreement with Iran shows that Beijing considers itself to be in a geopolitical position to defy the United States. It feels it is powerful enough to withstand unilateral sanctions, as it did during the trade war. Chinese investment in Iran could spur further punitive sanctions against Chinese companies, which have already been subjected to them by the U.S. administration. As the U.S. State Department spokesperson wrote in response to questions about the draft agreement, "The United States will continue to impose costs on Chinese companies that aid Iran, the world's largest state sponsor of terrorism."

In addition to all these factors, the projects contained in the draft agreement (banking, airports, 5G telecom, ports, railways and dozens more) are compatible with China's ambitious goal to extend its economic and strategic influence across Eurasia through the Belt and Road Initiative (BRI). The Islamic Republic occupies a vital geostrategic position straddling two oil-rich regions, the Caspian Sea and the Persian Gulf, which makes it indispensable to the BRI.

In the post-JCPOA era, The U.S.-China relationship faces its most severe challenge in four decades. The two powers need to reconcile and cease confronting one another. The draft agreement between Beijing and Tehran has not yet been submitted to Iran's parliament for approval and has not been made public, and Beijing officials have not disclosed its terms. It is not yet clear whether China has signed off on it. Despite all these uncertainties, one thing is for sure: if the agreement is put into effect, the resulting partnership would create new and potentially dangerous flashpoints in the deteriorating relationship between China and the United States.

Mordechai Chaziza holds a Ph.D. from Bar-Ilan University and specializes in Chinese foreign and strategic relations.

This article was first published by the Begin-Sadat Center for Strategic Studies.