EU review of Palestinian textbooks is a tragedy of errors, says watchdog group 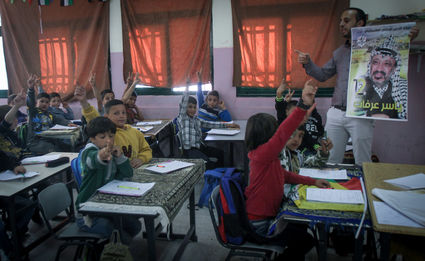 A Palestinian teacher lectures at the Salem School for Girls on the life of the late Palestinian leader Yasser Arafat on the 12th anniversary of his death, in the West Bank city of Nablus, on Nov. 10, 2016.

(JNS) - Palestinian textbooks are rife with blatant incitement against Israel, as has been reported for decades. And in the United States, for example, Palestinian children studying under the Palestinian Authority school curriculum learn Newton's Second Law through the image of a boy with a slingshot targeting Israeli soldiers. And Dalal al-Mughrabi, the perpetrator of the 1978 Coastal Road massacre - in which 38 Israelis, including 13 children, were killed, and 71 wounded - is celebrated in an entire chapter teaching Arabic reading comprehension.

In April 2018, the United Kingdom commissioned a report on Palestinian textbooks from the Germany-based Georg Eckert Institute for International Textbook Research (GEI), which subsequently published what was called the Inception Report, which lays out the introduction to an eventual full report, but has been found to be riddled with mistakes and mistranslations. The European Union then joined in the process, but has now decided to issue its own Interim Report, which is now classified, and a Final Report, again using the GEI.

Marcus Sheff, CEO of the Jerusalem-based NGO Institute for Monitoring Peace and Cultural Tolerance in School Education, obtained a GEI presentation of the classified Interim Report, calling it "bizarre."

He told JNS that "the review has been a comedy of errors from start to finish. The researchers have reviewed the wrong textbooks, taking textbooks for Israel's Arab schools in Jerusalem, earnestly praising them and presenting them as coming from the Palestinian Authority's curriculum."

"This is really regrettable," he said. "The European Union and the U.K. had the opportunity to add to our collective understanding of these extreme textbooks and to fulfill their duty of care to Palestinian students."

An independent review by IMPACT-se shows Palestinian textbooks contain an overwhelming amount of incitement to violence, terror, martyrdom, jihad and anti-Semitism. Both the E.U. and U.K. initiated the reviews following IMPACT-se's report and following subsequent parliamentary demands for a review into how taxpayer money has been spent on incitement in the P.A. and the U.N. Relief and Works Agency for Palestine Refugees in the Near East.

Sheff said the introduction by GEI "contains embarrassing mistranslations of basic Arabic, a lack of familiarity with Palestinian culture and, bizarrely, the citing of non-existent research. This is not a particularly complex project. It is hard to fathom how it went so wrong," he said.

What is clear is that something is amiss at the E.U. and Sheff is out to discover why.

"The question is being asked now in the U.K. of the British government whether they know their very expensive Inception Report is not going to be used by the E.U.," said Sheff.

According to Sharon Offenberger, a spokesperson for the E.U. Delegation in Israel, "the issue of the Palestinian curriculum has been discussed in the European Parliament, which stressed the importance of values such as peace, freedom, tolerance and non-discrimination within education."

She told JNS that "against that background, the E.U. is financing a study of Palestinian textbooks against defined benchmarks, based on UNESCO standards on peace, tolerance and non-violence in education. It also covers the curriculum used in East Jerusalem schools."

"The study intends to provide a comprehensive and objective analysis of current Palestinian textbooks vis-à-vis international quality of education standards."

According to Offenberger, the E.U. study was launched in September 2019 and is to be concluded by the end of 2020.

"There is no final report yet," she said. "In July, an interim report was submitted to the E.U. for approval. The purpose of the interim report is to inform partners about the current status of progress and to receive feedback on the proposed methodology."

"The Commission will present the findings of the study to stakeholders and the European Parliament and will inform the latter of the outcome of its bilateral dialogue with the Palestinian Authority."

Offenberger said the inception report "has not served as the basis for the E.U.-funded textbook study."

Sheff wants to know why, but further inquiries by JNS went unanswered by Offenberger.

On July 1, the E.U. stated that the interim report will not be published, disregarding the fact that it has published interim reports that it commissioned in the past.

But all is not lost in the United States, at least.

There is legislation going through Congress at the moment. The Peace and Tolerance in Palestinian Education Act (H.R.2343), introduced in April 2019, is a bill that directs the U.S. Department of State to report annually to Congress on the school materials used by the Palestinian Authority or UNRWA in the West Bank and Gaza.

The bill notes that "the new Palestinian curriculums fail to meet the international standards of peace and tolerance in educational materials" established by UNESCO.

It also notes that textbooks used by the P.A. and UNRWA "demonize Israel, encourage war and teach children that Palestinian statehood can be achieved through violence."

It also found that textbooks "do not mention Israel or Judaism, feature maps of the region that exclude Israel and include content that incites violence."

Thus, while there is positive traction in the United States, the E.U. is dragging its feet for unknown reasons.

"Adding insult to injury, this report has been plagued by delay," said Sheff. "The British government clearly wants it made public as soon as possible, but the E.U. has declared it is staying under wraps. Frankly, given the debacle this research project has become, one can understand why."