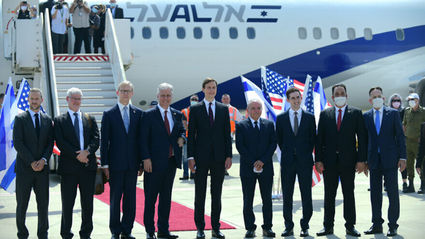 Presidential son-in-law and senior adviser to U.S. President Donald Trump Jared Kushner, National Security Advisor Robert O'Brien and members of the U.S.-Israeli delegation attend a ceremony ahead of their departure from Tel Aviv to Abu Dhabi at Ben-Gurion International Airport on Aug. 31, 2020.

(JNS) - The first commercial flight from Israel to the United Arab Emirates touched down in Abu Dhabi on Monday, carrying a delegation of U.S. and Israeli officials.