'Services, but not shul': How Orthodox communities are preparing for a pandemic High Holiday season 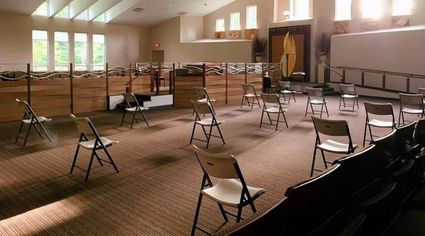 Chairs are set up for a socially distanced service at the Young Israel of Toco Hills in Atlanta.

(JTA) - Less than two miles away from the Center for Disease Control's campus in Atlanta, where doctors and researchers prepare guidance for the nation's coronavirus response, an Orthodox rabbi is preparing a different set of plans.

Rabbi Adam Starr's task: how to accommodate hundreds of people for in-person services on Rosh Hashanah and Yom Kippur during a pandemic.

To keep congregants safe, he's dramatically shortening the services, which can run for most of the day under normal circumstances, to limit the duration of potential virus exposure that any worshipper might encounter.

"First thing to go is my sermon," Starr said.

Starr is not alone in making that kind of trade-off.

Across the country, Orthodox communities are preparing to come together for live services during the High Holidays, even as most non-Orthodox synagogues have committed to holding services online. That's because Orthodox Jews do not use electronics on Shabbat or holidays, leaving livestreamed options off the table.

Holding in-person services amid a pandemic means adjusting the pacing, spacing and other practices to maximize safety, and accepting the likelihood that many people will choose not to attend services at all. Even those who are optimistic about being able to safely hold services are reckoning with the fact that the most powerful days of the Jewish year will bear little resemblance to how they have been observed in the past.

"This is services, but this is not shul," said Maharat Ruth Balinsky Friedman of Ohev Sholom, an Orthodox synagogue in Washington, D.C., using the Yiddish word for synagogue. "Shul means everyone is together in the space, davening together, and this is not that."

In a normal year, Friedman's synagogue would host 700 to 800 worshippers for High Holiday services. This year, she said, about 100 members expressed interest in attending an outdoor service.

Those who plan to stay away, she said, include parents of young children struggling without child care and older people who face the biggest risk from the coronavirus.

"The folks who can't come are the people who already are experiencing this pandemic the hardest," Friedman said. "It just adds insult to injury to have shul start without you."

Other synagogues also anticipate greatly reduced attendance. At the Jewish Center on the Upper West Side in Manhattan, approximately one-third of the congregation is older than 60. Rabbi Yosie Levine expects many of those members to stay home.

"I suspect we're going to have a pretty significant drop-off in attendance," he said.

That's not necessarily a bad thing as social distancing requirements mean the synagogue can accommodate less than half its regular capacity. In a normal year, the Modern Orthodox synagogue would have between 700 and 800 people praying in the building on Rosh Hashanah and Yom Kippur. This year, approximately 300 people will be able to participate in services spread across multiple rooms and time slots.

Levine is hoping to find an outdoor space to rent to accommodate those who would feel safer outdoors. After failing to find a school playground or park space that would work, he is looking into having a block closed off for services in the street.

In some Hasidic communities, like the Borough Park and Williamsburg neighborhoods of Brooklyn, synagogues are expected to hold in-person services as they have for months. Some synagogues have operated with few, if any, restrictions.

But most Orthodox communities, mindful of risk and, in some cases, traumatized by their own experiences - the disease spread in New York's Orthodox communities early on - are making substantial changes. In some synagogues, the cantors will wear masks. Others will install Plexiglas barriers to keep them and any virus-laden particles they might expel through singing safely separated.

At suburban synagogues, where the space is less cramped, leaders are engaged in the complicated logistics of planning multiple services. At the Cleveland-area's Green Road Synagogue, Rabbi Binyamin Blau said he expects to have as many as four services, some indoors and some under open tents outside. An engineer who is a synagogue member is helping Blau arrange the setup, which for the indoor services includes seating charts designed to ensure at least 6 feet of space between congregants.

In Atlanta, Starr has already ordered a large tent for outdoor services. He's expecting to have six to eight minyans at his synagogue, with options for an indoor or outdoor service. The timing of the services is designed to allow parents to take turns attending and staying home with their children, as childcare will not be offered as it normally would be.

The compromises all feel worth it coming off a period when the very foundations of Orthodox life, which includes thrice-daily prayer often conducted communally, were demolished with little to replace them.

"Unfortunately for three months, we had no shul at all," said Rabbi Yaakov Robinson, who works at Beis Medrash Mikor Hachaim, an Orthodox synagogue in Chicago, where services resumed in late May. "After the difficult year we've had over the last four months, people want a very meaningful Rosh Hashanah and Yom Kippur."

Robinson is not planning to cut down the service for at least a couple of reasons: He believes his congregants want the feeling of normalcy provided by the full length and he doesn't see a health benefit.

"You're already exposed to each other for four hours, I'm not sure 4 1/2 hours makes a difference," he said.

Other rabbis and congregations are shortening services after being advised to limit the amount of time that people are gathering to lower the risk of spreading the coronavirus. While a typical Shabbat morning service in an Orthodox synagogue can take between two and 2 1/2 hours, morning services on Rosh Hashanah can last as long as five or six hours. That has led to some difficult choices.

Several synagogues said they would begin with shacharit rather than pesukei d'zimrah, which cuts out at least 20 minutes and does not need to be recited with a minyan.

Blau said he would not have members open and close the ark or carry the Torah around the entire sanctuary for people to kiss, both practices he's done away with at Shabbat services since reopening. (He doesn't mind cutting out the carrying of the Torah, which he said "takes 15 minutes and breaks up the decorum.")

But some elements of the service would remain untouched, he said, even though they are not required for the worshippers to fulfill religious requirements.

"Unetaneh tokef is in," Blau said, referring to the prayer that asks who will live and who will die. The prayer specifically mentions the specter of plague. "We're not cutting that out."

Other centerpieces of the High Holidays services are also getting a pandemic makeover.

For Yizkor, a memorial service on Yom Kippur, Starr is considering organizing a Zoom service before the holiday or offering a 30-minute service outdoors for those who prefer not to join for the full service but want to recite Yizkor.

For those who would rather not come to synagogue for services, many still want to hear the shofar blowing, which is considered one of the most important obligations on Rosh Hashanah. (This year, Rosh Hashanah begins on Shabbat, when Orthodox synagogues do not blow the shofar, but the shofar will be sounded on the second day and at the conclusion of Yom Kippur.)

The multiple soundings of the shofar and prayer services have created a need for more prayer leaders and shofar blowers.

"Thank God, I am blessed with a shul with a lot of people who know how to daven," said Starr, using the Yiddish word for pray. But when it comes to shofar blowers, he said, "I would be happier if we had a couple more."

The Orthodox Union, an umbrella organization of Orthodox synagogues, is offering a training program to teach people who have never led a High Holiday service how to do so.

"A lot of it is focused on confidence-building," said Yehuda Friedman, director of synagogue services for the Orthodox Union. "Because it is not easy for people to get up in front of a crowd."

That training also could be useful for Jews who observe the High Holidays at home. And with weeks to go before the High Holidays begin and COVID-19 cases continuing to proliferate in large parts of the country, even the most carefully laid plans for live services are subject to revision.

"We didn't know where we're going to be two months ago, so it felt premature to plan," Starr said. "The whole world could change."

But with memories of a solitary Passover still fresh, many Orthodox Jews say they will be happy with whatever kind of communal services they are able to safely hold.

"Even if it's a fast davening and we're all sitting far apart, it still feels nice seeing members of the shul I haven't seen," Blau said. "Once I figure out who they are because of their mask." 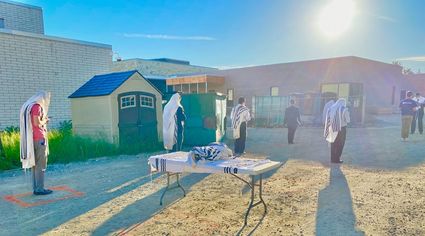