The show must go on at the Jewish Academy of Orlando 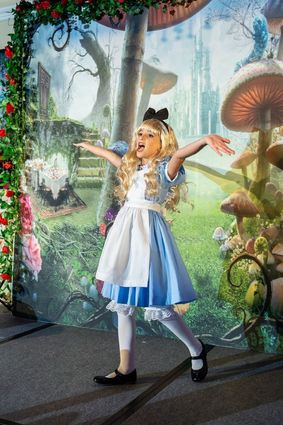 JAO student performing the lead role of Alice in the play now being made into a video.

Jewish Academy of Orlando presents Disney's Alice in Wonderland on video. The play, previously scheduled for May, and then rescheduled for October, will now be produced as a video production.

"After meeting with physicians who have served as advisers on our re-opening task force, our school came to the decision to move away from a live audience performance and instead focus on creating an unforgettable video production," said Alan Rusonik, head of school. "This will ensure the safety of our students, families, and our community, while also rewarding the children for all their hard work."

The video will be filmed professionally later this fall, and it will have all the colorful costumes and scenery that were planned for the live performance.

It will be released later this year.

JAO music teacher and show director Eric Levine added, "Our children worked extremely hard preparing for this show, and I couldn't envision a scenario where all that work went for naught. While many schools cancelled their spring productions, we chose to look for alternative ways to perform it in the safest manner, and we ended up with the movie idea. We've created a rehearsal plan, as well as a filming plan, that follows all the recommended safety guidelines to minimize risk. We're very excited to have this opportunity."

To learn more about Jewish Academy of Orlando, please visit: jewishacademyorlando.org or follow the school on Facebook https://facebook.com/JewishAcademyOrlando/