Mendelsohns lose their home in Montana to fire 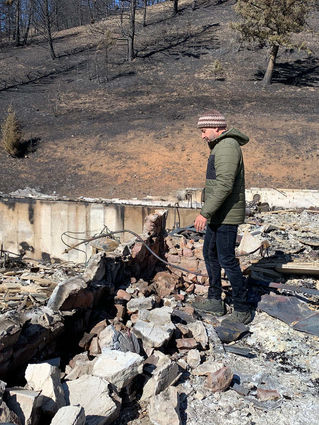 Jason Mendelsohn walks through the debris of what is left of the family's home.

Maitland residents Jason and Ronni Mendelsohn have a home in Bozeman, Montana, which they recently lost to a fire that destroyed 28 homes in the area. The NBC television station in Montana interviewed Mendelsohn and rode with him to his first viewing of his home after the fire. He wasn't prepared for what he saw, as he really didn't think the fire would reach his house or property.

The entire house was burned to the ground. He walked around ash and discovered the only thing left standing in the midst of the debris was his stationary bike.

Mendelsohn was not at his home when the fires erupted only a few miles away on the hills behind the house. He and his son returned to the house and saw that the wind had turned directions - toward them.

"My son was like, 'We need to pack up and get out of here now,'" Mendelsohn told the NBC reporter, Jayda McClendon.

"If you are given five minutes to evacuate, you have to think of what you would take with you," he told Heritage Associate Editor Kim Fischer.

They quickly packed up all their stuff, and as they left they could see flames all around their home.

According to NBC Montana, the fire destroyed all 40 acres of the Mendelsohn family's property. From his wife's veteran father's flag to his son's historic rhino tooth and his daughter's jewelry from her grandmother - he says they lost everything.

Mendelsohn arrived back in Orlando last Tuesday and plans to be here for awhile.

"While most of where we are is leveled or charred, I know it will grow back, and I figure we will create great memories in the future," said the ever-positive Mendelsohn.

Heritage will do a follow-up article.