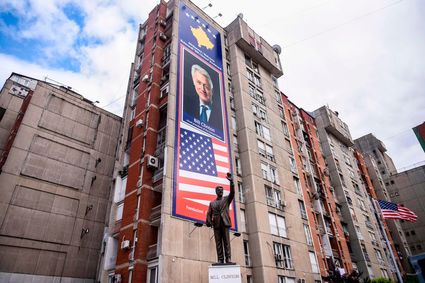 A statue of former US President Bill Clinton is pictured at a boulevard named after him, in Pristina, Kosovo, June 23, 2020. With streets named after U.S. presidents and stars and stripes flying in the capital, Kosovars do not wear their love of America lightly.

(JTA) - For Flori Dedoni, a member of the tiny Jewish community of Kosovo, the news that his country is establishing formal diplomatic ties with Israel is cause for celebration.

Until last week, Israel was among the dozens of countries that had not recognized the Muslim-majority territory sandwiched between Albania and Serbia.

"When someone learns I'm Jewish, they usually ask sometime during the conversation why Israel doesn't recognize us," Dedoni said. "Now, finally it's happening and the feeling is just festive. Plus, I don't have to explain anymore."