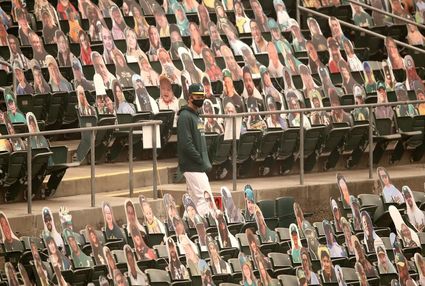 Mike Minor of the Oakland Athletics walks through the stands that are filled with cardboard cutouts during a game against the Houston Astros at RingCentral Coliseum in Oakland, Sept. 10, 2020. The cutouts have become a fixture for most teams this season.

(JTA) - From Hank Greenberg to Sandy Koufax to Alex Bregman, Jews and baseball go way back, to the 19th century. It's not just players and fans - the participation even extends to the role of official baseball historian of Major League Baseball.

The first man to hold the title, the legendary Chicago sportswriter Jerome Holtzman, was Jewish, and an inductee to the International Jewish Sports Hall of Fame. Holtzman died in 2008, and in early 2011, the official baseball historian role went to John Thorn, a prolific historian and author.  Thorn, the son of Holocaust survivors who was born in...