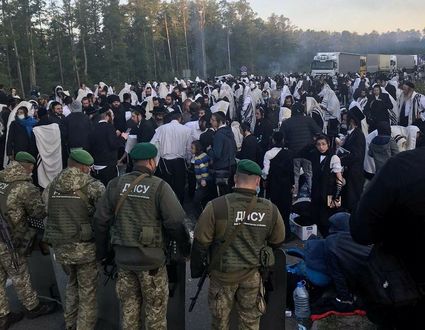 Belarusian soldiers guard the border to Ukraine against hundreds of Jewish pilgrims, Sept, 15, 2020.

(JTA) - On the border of Belarus and Ukraine, Avremi Vitman tried to shake off the morning chill as he prayed earlier this week.

Vitman was hungry and uncomfortable after yet another night sleeping in his coat, two weeks after arriving in Belarus en route, he hoped, to Uman, the Ukrainian city that is the site of an annual Rosh Hashanah pilgrimage for followers of Rabbi Nachman, founder of the Breslov Hasidic movement.

"Nights are cold here, we sleep in our coats," Vitman told the Jewish Telegraphic Agency. He arrived at the border crossing on Monday after spending two weeks in Pinsk, sleep...