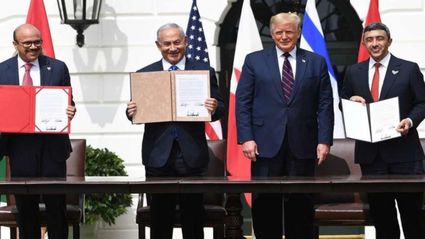 WASHINGTON (JTA) - Benjamin Netanyahu has complained for years about Arab leaders telling their people one thing in Arabic and diplomats saying another to Western audiences in English.

Abdullah bin Zayed bin Sultan Al Nahyan, the foreign minister of the United Arab Emirates, was on the White House lawn speaking - in Arabic - about the "innate principle" of peace and thanking the Israeli prime minister for helping to bring it about.

If the agreements signed Tuesday by leaders of the UAE, Israel, the United States and Bahrain were historic, it was because of this: Two Arab lea...