By Deborah Fineblum and Sean Savage

With HIAS changing longtime focus, supporters question some of its priorities 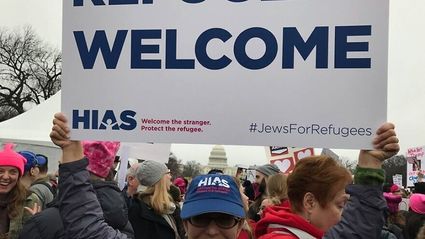 A HIAS supporter at a pro-immigration rally.

(JNS) - The Hebrew Immigrant Aid Society, better known as HIAS, was for the better part of a century responsible for helping settle generations of Jewish refugees in their new homes in the United States. From 1881 through the release of Jews from the Soviet Union in the early 1990s, the organization worked not only to resettle the new arrivals, but was involved in assisting them legally as well. Yet in a way, HIAS was a product of its own success and the success of the American Jewish community, whose activism helped bring most Jews over who wanted or needed to leave other countries.

Today, nearly all of the refugees HIAS resettles on an average each year are non-Jews - many of them Muslims from Syria, Iraq, Libya, Afghanistan, Somalia and other Middle Eastern countries.

As an organization with deep Jewish roots, HIAS's new mission and purpose are being questioned by some observers, especially during a time of global uncertainty and rising anti-Semitism.

In 1975, the U.S. State Department asked HIAS to expand its portfolio and assist in resettling 3,600 Vietnamese refugees after the end of the Vietnam War and nearly two decades of U.S. involvement in Southeast Asia.

In 2014, HIAS dropped the word "Hebrew" from its name and was simply called HIAS. At the same time, HIAS announced relocation of its headquarters from New York City to suburban Maryland.

Most notable among criticisms is that several HIAS partners have been linked to organizations with ties to terrorism, including Islamic Relief USA and the Islamic Relief Worldwide, whose leadership recently called Jews "the grandchildren of monkeys and pigs" and referred to the terrorist group Hamas "the purest resistance movement in modern history."

The transformation might surprise longtime donors who continue to give to HIAS in gratitude for everything the organization did for their parents, grandparents and great-grandparents, as well as those who left money in ongoing estate and legacy gifts.

The Hebrew Immigrant Aid Society was founded for the express purpose of helping Jewish refugees establish new lives in the United States in the form of housing, English lessons, job training, schools for their children, even furniture and kitchen appliances.

Over the last 130-plus years, some 4.5 million immigrants have received HIAS services, including the grandparents and great-grandparents of many American Jews.

From the years of peak Jewish immigration in the late 19th and early 20th centuries to settling survivors of the Holocaust and displaced persons a generation later to the outpouring of Soviet Jews in the 1990s, HIAS was relied upon by generations of Jewish refugees seeking to make a new home in America.

In the last few years, few Jewish refugees have sought asylum in America (the U.S. State Department puts the 2019 Jewish refugee entry number at 37) and the organization, with its $80 million budget, has been resettling thousands of mostly non-Jews.

"I have no doubt that HIAS once did amazing work - in the early decades of Jewish immigration, the Holocaust years, with Russian resettlement, helping individuals and unifying families," says Jonathan Sarna, the Joseph H. and Belle R. Braun Professor of American Jewish History at Brandeis University and author of "American Judaism," among other titles. But today's HIAS "is a complicated issue for the Jewish community," he says.

"There are certainly Jews who support HIAS," Sarna adds, suggesting that many of them look at a Muslim Syrian refugee and say, "That was my father, my grandmother or my great-grandfather 100 or 70 or 30 years ago. I need to help him."

On the other hand, although settling Muslims in significant numbers in the United States "may be ethical and upright," adds Sarna, "when there are more Muslims than Jews in America, these are the policies that will have made that happen."

And a key question remains: Is the Jewish community genuinely interested in seeing a limited amount of philanthropic dollars that could be going to distinctly Jewish causes going instead toward the resettlement of Christians and Muslims?

"I can't imagine why they would be," says Alexander Smukler, who in 1991 was a 31-year-old refusenik from Moscow helped by HIAS to make a new home in the United States, along with his children, his wife and her parents. "Not if they knew that the only thing still Jewish about HIAS is the money that supports it and not if they know who they're resettling."

After establishing a successful construction business in New York, Smukler began donating to the organization and took lay leadership roles as well. "I knew that, from 1970 till 2003, HIAS helped 450,000 Jews from the Former Soviet Union come here," he says. "And I wanted to support that."

But about 15 years ago, he learned something that disturbed him: Many of the refugees he was supporting were Muslim.

"By using Jewish money and a giant endowment of millions to settle thousands of people into the U.S. each year - many of them who hate Jews - HIAS has basically betrayed the Jews," he says. "Then, after HIAS gives them services for a couple months, they leave them to the American welfare rolls."

'No question we're in tough times'

One of the most significant sources of HIAS revenue is grant money from the U.S. government, totaling roughly $20 million a year (down several million from the Obama years). "As [Barack] Obama was winding down his presidency, he was pouring refugees and other immigrants in at astronomical rates - 9,577 refugees, more than half of them Muslims - in just one month, July 2016, compared to Trump's 151 in July four years later," says Ann Corcoran, whose Refugee Resettlement Watch tracks immigration to the United States.

The high number correlated with the Syrian Civil War, which started in 2011 and even now, causing a mass migration of more than 5 million Syrians worldwide, particularly during the first five years.

But it's that $20 million that HIAS continues to take from the federal government each year to settle Muslims in the United States that most disturbs Corcoran, "especially in light of the diminished refugee flow, between COVID-19 and Trump administration pushbacks. And now we see HIAS beefing up their fundraising. I'm just not sure what they need all that money for," she says, "especially with their huge endowment and their executive making over $350,000 a year."

Hetfield notes that with immigration all but halted in the United States, HIAS has been forced to adjust. "Since we are so limited now in allowing refugees into the U.S., most of the work we do is helping refugees who flee to another country where they are safer," he said.

"We work to keep [refugees] safe wherever they are. The number of refugees is down now, but the need for us is up," he said, referring to help HIAS provides after refugees are resettled.

"We consider our partnerships with Federations very important; that funding allows us to carry out our mission, but it's a small part of our $80 million budget," says Hetfield, who adds that the Jewish community plays an important role in HIAS's settlement activity. "We have been extremely successful in partnering with 450 congregations to help settle refugees, especially younger people who engage with the refugees as Jews."

But with donations down and needs up, including health and security services during a global pandemic and civil unrest, plus the uptick in unemployment, why are Jewish federations using dwindling and overstretched funds to resettle Muslims? And is that where Jewish donors want their dollars to go?

"No question that we're in tough times with federations laying off some of their own staff and increasing pressure to prioritize every dollar coming in," said Sarna.

And do donors giving through federations or directly to HIAS know who they're helping into the country and eventually becoming American citizens?

Those whose legacy and estate gifts have outlived them clearly do not know, but what upsets Smukler is that "HIAS continues to aggressively raise money from living Jews - many of them elderly people whose families were helped years ago and who still send annual gifts. Their website is misleading and their fundraising campaign is misleading because they don't let you know how many of the people they are resettling are Muslims."

There's a crucial difference between past Jewish refugees and current Muslims, argues Richard Landes, a retired Boston University history professor now living in Jerusalem. "Jews came into the country determined to contribute to America - to be American - but the Muslims arriving now don't always feel that way. We like to think if we are nice enough to our enemies they will stop hating us, but our history has shown that the incapacity to see malevolent intent in others is itself very dangerous to Jews."

Harold Berman, former executive director of the Jewish Federation of Western Massachusetts, who now lives in Israel, is disturbed by "HIAS's blatantly anti-Israel position. It regularly sides with the U.N. on anti-Israel policies and condemnation. It's like HIAS no longer has a mission; it has an agenda."

Indeed, HIAS has been very critical of Israel's policies regarding asylum seekers, many of whom illegally crossed into Israel from African countries such as Sudan and Eritrea. This criticism comes despite efforts by Israel to enforce its immigration laws and deport the asylum seekers, who have clashed with local residents and led to an increase in crime in neighborhoods where they live.

These positions are of concern to many observers, especially as former HIAS chief Dianne Lob prepares to take over the chairmanship next year of the Conference of Presidents of Major American Jewish Organizations, the umbrella organization made up of the leaders of the country's most influential Jewish organizations.

"The council chair is the most powerful position in the Jewish world outside of Israel," says Smukler. "To have it filled by HIAS with its pro-Muslim and anti-Israel policies, which in no way represents most American Jews, is very dangerous."

Is HIAS needed anymore? Though Sarna points to a bloc of Jewish supporters who see HIAS as a well-oiled refugee resettlement operation. "which could be needed in the case of another wave of Jewish migration to the United States," the situation reminds him of the fate of Jewish hospitals.

"They were very much needed in the early 20th century, when many American hospitals barred Jewish doctors. But most of those Jewish hospitals are not Jewish anymore - it's just not necessary," he adds. "So too, now that it's been almost a generation since we had a big spurt of Jewish immigration, it's likewise understandable that some people are raising the question to ask how long do we need to keep HIAS going?"

Smukler puts it this way: "We can't stop Muslim organizations from bringing in Muslims, but it should never have been a Jewish priority, especially not now when our own people have so many needs of their own."