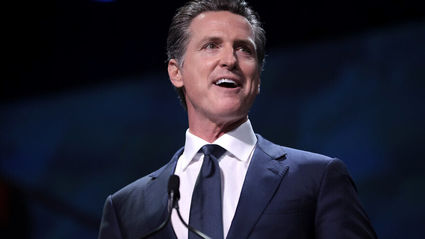 Newsom, a Democrat, cited the ongoing pushback over the curriculum for why he vetoed the measure, AB-331.

"I value the role ethnic studies plays in helping students think critically about our history and understand the experience of marginalized communities in our state," he wrote in his veto message. "This academic discipline will help prepare our young adults to become civically engaged and participate fully in our democracy."

He also wrote that an early version of the curriculum "was insufficiently balanced and inclusive, and needed to be substantially amended," and that the latest proposal under review "still needs revision."

In August 2019, numerous Jewish and pro-Israel groups slammed an ethnic-studies curriculum proposal for its "blatant bias against Israel," including parts discussing the boycott of the Jewish state, along with echoing classic anti-Semitic tropes.

In response to the backlash, Newsom apologized to the state's Jewish community, pledging that it "will never see the light of day" and be substantially fixed.

AB-331 was introduced in the spring of 2019 by State Assembly member Jose Medina, a Democrat who chairs the Assembly Higher Education Committee and is a member of the California Legislative Jewish Caucus, and passed the state legislature in August. Newsom had until Sept. 30 to sign or veto it. Eighty groups called on Newsom last month to veto it.

In a statement, Medina said the veto was "a missed opportunity" and "a disservice" to students.

"I am committed to making ethnic studies a reality for all of California's students and will be re-introducing this legislation next year," he said.

"We are relieved Governor Newsom acknowledged the concerns that so many citizens across California have expressed about the Ethnic Studies Model Curriculum (ESMC)," said StandWithUs co-founder and CEO Roz Rothstein in a statement. "The latest draft must be revised to accurately represent and include Jews, teach about anti-Semitism in all its forms, and remove guiding values and principles which will be used to justify bringing bias and hate into our classrooms."

In a statement, Serena Eisenberg, director of the American Jewish Committee's Northern California Region, said that while her organization "supports ethnic studies," it believes "that K-12 students across California should be able to learn the role of ethnicity, race and religion in the life of all of the state's citizens, including those previously ignored. High-quality ethnic studies courses can help address the issues of racial injustice and strengthen our democracy."

Sarah Levin, executive director of JIMENA: Jews Indigenous to the Middle East and North Africa, told JNS that her organization "has always supported a high-quality Ethnic Studies Model Curriculum that adheres to California Department of Education guidelines. We've invested time and energy to provide CDE with educational materials to ensure that Jewish students are considered, and that a lesson plan focused on the American Jewish experience is a part of the curriculum. We applaud Governor Newsom for ensuring that the curriculum is amended before making it a high school graduation requirement."

AMCHA Initiative co-founder and director Tammi Rossman-Benjamin in a statement that "there is an important distinction between the broad and worthy field of ethnic studies, with its goal of understanding and celebrating the contributions of California's and our nation's diversity, and the narrow field of 'Critical Ethnic Studies' that the developing California curriculum is modeled after."

"The mission of this narrow understanding of ethnic studies is to promote political beliefs and political activism that are antithetical to the educational setting, inherently anti-Semitic and pose a dangerous threat to Jewish students," she continued. "We commend the governor for recognizing this important distinction, and we hope that moving forward, the state legislature will take steps to ensure that state-approved instructional materials and K-12 classrooms are free from political bias and not used to advance political causes."