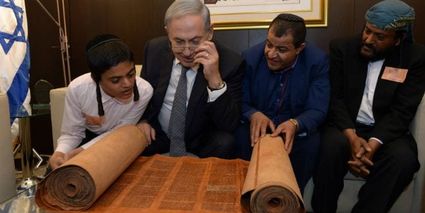 Israeli Prime Minister Benjamin Netanyahu looks at an 800-year-old Torah scroll as he meets with Yemenite Jews who were brought to Israel the beginning of October as part of a secret rescue operation.

In an interview with Kol B'Rama radio, Prime Minister Benjamin Netanyahu invoked biblical precepts in order to convince religious Jews to social distance during the holiday of Simchat Torah that coincided with Shabbat last weekend.

"Take care, there should be no dances on Simchat Torah," Netanyahu said, referring to the tradition of dancing with Torah scrolls in synagogues. "There is no greater desecration of G-d's name than if because of Simchat Torah we lose a life. Pray outside, keep the guidelines, and thus sanctify both the Torah and life."

"The Haredi (ultra-Orthodox) public is close...