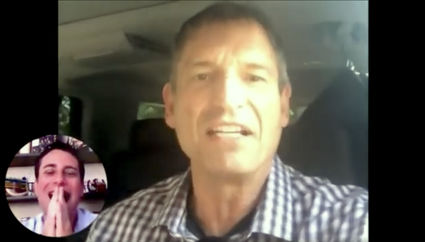 Robby Etzkin reacts to a video greeting by Bernie Kosar, quarterback for NFL's Cleveland Browns from 1985-1993.

On Oct. 5, more than 100 households gathered on Zoom for a virtual thank you party in honor of Robby Etzkin, who left his position as executive director at The Roth Family Jewish Community Center of Greater Orlando near the beginning of the COVID-19 pandemic after nearly eight years of service.

Guests included former and current JCC staff and members, staff from the JCC Association in which Etzkin has been an active fixture for nearly 15 years, as well as friends and family from across the country. The evening was planned by colleagues and friends of Etzkin's, including the evening's host, Amy Schwartz Kimlat (former marketing director), plus Abby Paulson Lesorgen (former youth and camp director), Lory Conte (former North Florida BBYO director), and Lauren Friedman Koblick (former Rosen JCC membership & events director).

When the attendees registered for the virtual event, they were asked to share how Etzkin impacted their lives and the JCC community in just a few words. A sample of the submissions were compiled into a musical tribute to Etzkin, which played during the party.

JCC members had many kind words for Etzkin as well. Ronny Shisgal said that Etzkin is "the ultimate role model for kindness and leadership." Rita Isaak used these words to describe Etzkin: "committed, fresh outlook, kindness, out of the box thinking."

After the video, guests played interactive trivia games about Etzkin's impact, led by Lesorgen and Conte.

Etzkin was taken by surprise with a video greeting by Bernie Kosar, a childhood sports hero of his, who played as quarterback of the NFL's Cleveland Browns from 1985-1993.

"Your friends and colleagues at the JCC in Orlando and myself wanted to really thank you for eight awesome years at the community center," Kosar said in the video message. "We wanted to wish you the best luck in this next chapter of your career. And like a quarterback, you called plays and inspired your team and always shared the credit for your wins."

As a testament to his leadership and the gratitude of the community, 60 people contributed in order to purchase a gift for Etzkin. As a result of the overwhelming generosity, the committee was able to purchase a whole basket full of gifts, with highlights including a years of service award, a trio of trees in Israel planted by JNF, and a brick that will be permanently affixed on the campus of Etzkin's alma mater, the University of Florida, wishing him a "todah rabah" for his many contributions.

Etzkin's contributions to the JCC are many. He served as the executive director since the fall of 2016, after serving in that role on an interim basis for nearly a year. Prior to that, Etzkin served as the JCC's assistant executive director for three-and-a-half years beginning in October 2012, a position in which he supervised the leadership of the JCC's many departments. 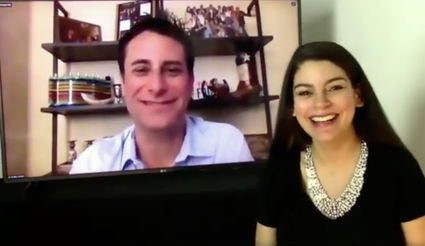 For nearly eight years, Etzkin brought new processes and programs to the JCC that strengthened and grew the center. He has a hands-on style of leadership, meeting on a weekly basis with every program department director, leading by example with a simultaneous eye on the big-picture and an emphasis on the minute details of operation that contribute to an environment of excellence. He is known for establishing partnerships in the Jewish and secular communities to grow programs, create win-wins, and increase participation.

For Etzkin, leading The Roth Family JCC was a coming home of sorts, having grown up participating in the JCC's youth programs, and later serving as a summer camp counselor and unit head before launching his professional career leading the summer camps at the JCCs in Richmond and Austin.

While Etzkin has not yet announced the next move in his career, it is clear based on the evening's turnout that he will have Central Florida's Jewish community standing behind him.

Bonnie Rayman, Etzkin's former counterpart as founding executive director at the Rosen JCC in South Orlando, summed him up well: "Robby is an amazing, hardworking, and inspiring colleague."