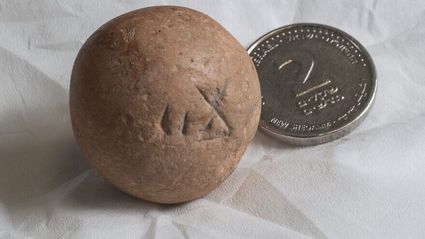 A limestone "two-shekel" weight, dating back to the Iron Age/First Temple period, discovered during excavations conducted by the Israel Antiquities Authority in conjunction with the Western Wall Heritage Foundation. It is seen here next to a modern two-shekel coin.

(JNS) - An ancient two-shekel weight has been unearthed beneath Wilson's Arch, adjacent to the Western Wall in Jerusalem, the Israel Antiquities Authority announced on Tuesday.

The limestone weight, dating back to the Iron Age/First Temple period, was discovered during an archaeological dig conducted by the IAA in conjunction with the Western Wall Heritage Foundation. It was revealed during the sifting of earthen fills at the site, which is soon to be included in the tour of the Western Wall Tunnels.