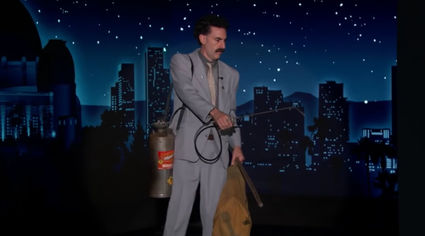 (JTA) - Sacha Baron Cohen's latest appearance in character as Borat was heavy on the bathroom humor - and on satirizing conspiracy theories that target Jews.

On "Jimmy Kimmel Live" on Monday night, Cohen showed up as Borat - the anti-Semitic, misogynist journalist from Kazakhstan who starred in a blockbuster 2006 film and is set to star in a sequel out this week. Right away, Borat said the coronavirus comes from "a place called Wuhan, which is in Israel."

"It is no surprise, they are spreading everything," he said.

When Jimmy Kimmel asked if he really thought that the virus originated in Is...