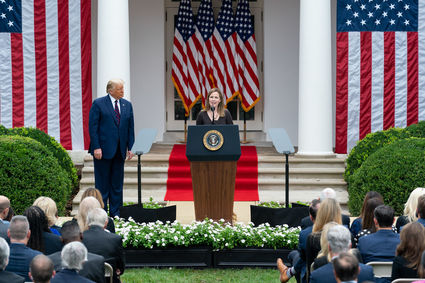 Judge Amy Coney Barrett delivers remarks after U.S. President Donald Trump announced her as his nominee for Associate Justice of the U.S. Supreme Court in the Rose Garden at the White House on Sept. 26, 2020.

Barrett, previously a judge on the U.S. Seventh Circuit Court and a professor at Notre Dame Law School, her law school alma mater, was confirmed 52-48. All but one Republican, Sen. Susan Collins (R-Maine), voted in favor of her nomination, while all Democrats voted against it.

She succeeds the late Ruth Bader Ginsburg, a heralded liberal judicial, feminist and Jewish icon who was the second woman to serve on...