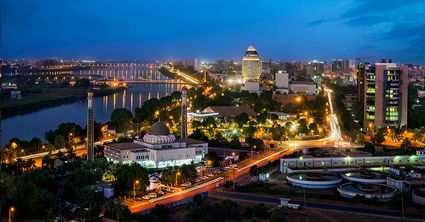 A view of Khartoum, Sudan.

(JNS) - Khartoum, Sudan, was the setting for the infamous Arab League summit in 1967 that produced the Khartoum Resolution known as "The Three Nos": no negotiations with Israel, no peace with Israel, no recognition of Israel. Now, 53 years later, Sudan has agreed to change these negatives into positives, meaning three yeses.

According to Ilan Berman, vice president of the American Foreign Policy Council, the Sudan-Israel agreement "is a significant development because it provides added momentum to the 'normalization' wave now taking shape between Israel and the Arab world."

Berman told JNS the deal is also "symbolically important" because Khartoum has "historically been extremely antagonistic to Israel."

For this reason, the agreement is "more of a true 'peace deal' than Israel's entente with the UAE and Bahrain," he said, noting that "the main benefit for Israel is that it creates another political ally for Jerusalem in the Muslim world."

Aside from practical purposes, such as Israel's ability to fly through Sudanese airspace, once the deal is signed, Israeli security officials can also now sleep slightly better knowing that Sudan will no longer be used as a transit base for terrorists and terror-related activity.

For years, Sudan cozied up to Iran as one of its few Sunni Arab partners. In 2009, unidentified aircraft, largely believed to be Israeli, hit a convoy of terrorists in Sudan. In 2011, Israel was accused of launching a missile strike in Sudan, killing two Hamas terrorists. And in 2012, Israel was again accused of destroying a Sudanese military facility in an airstrike.

If these reports are true, then it is clear that Sudan was a major security concern for Israel. Those concerns could now be allayed by an agreement that would see Sudan join other Muslim nations in normalizing relations with Israel.

According to Berman, the benefits for Sudan "are much more tangible."

"Since the ouster of the regime of Omar al-Bashir last year, Sudan's new transitional government has tried extensively to rehabilitate the country's international image," he explained. "This agreement is part of that process and combined with the country's removal from the U.S. state sponsors of terrorism list goes a long way to changing the way Sudan is viewed abroad."

Israel's growing relations with Ethiopia, Eritrea, Rwanda and Uganda will now be bolstered by its new relationship with Sudan. With many African nations having sided with the anti-Zionist Arab bloc at the United Nations for years, it is clear that this dimension is changing as well.

'A departure from past Egyptian practice'

Eran Lerman, vice president of the Jerusalem Institute for Strategy and Security, told JNS that while a number of years ago Sudan switched over from the Iranian camp, "Israel has also contributed to the Sudanese understanding of the cost-benefit analysis of switching sides."

"Sudan is a very important piece of strategic real estate," he said. "In the past, it was at the forefront of anti-Israeli positions in the Arab world. But much later, they were still active and lent their territory to the Iranian effort to supply Gaza with weapons."

He noted that this new deal changes the paradigm for Sudanese citizens coming back from Israel. In the past, they could be executed for treason. Now, resettling migrants back home is part of the agreement.

And while today the Sudanese face the severe problem of flooding, "in the future, they could face the opposite problem," said Lerman.

He recommended that Israel "do as much as possible to help the Sudanese."

He also emphasized Egypt's role in the Israel-Sudan peace agreement. "The fact that Egypt, still the most important player strategically speaking, welcomed the Sudanese decision is an indication of how close Israel has become with Egypt," said Lerman.

"Look at how they responded to normalization," he added. "This is a departure from past Egyptian practice."

Both countries possess long borders with the Red Sea, and Egypt also has the Mediterranean Sea on its northern border. Israel's desalination know-how could be hugely beneficial for both countries.

A world leader in recycled water and in the utilization of modern technologies for irrigation, the Jewish state, affirmed Lerman, "can be of major importance to both Sudan and Egypt in the years to come."