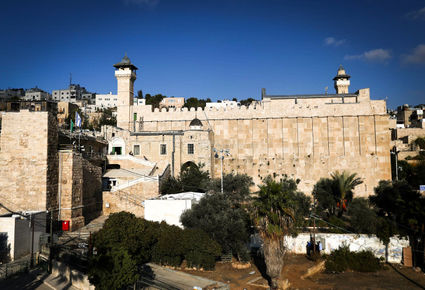 (JNS) - Hebron's Jewish residential section may finally witness new construction underway for more housing units. Pending a decision by the Jerusalem District Court, two areas of Hebron - the Hizkiyahu neighborhood on the site of the old central bus station and the site of the marketplace - are slated to undergo a facelift to make room for young couples. Predictably, there are those who don't want to see a growing Jewish presence in Hebron and have made an effort to prevent the project from progressing.

Yishai Fleisher, International Spokesman for the Jewish Community of Hebron, commended the decision by the Civil Administration to issue permits for housing.

"Finally, the Israeli government has recognized the Jewish rights in the rest of the property, and we thank them," he told JNS. "Soon, Hebron will have space for 30 new families to live and thrive in the City of Abraham."

Considered to be the second-holiest city in Judaism and contains the Tomb of the Patriarchs, Hebron is home to roughly 800 Jewish residents who live surrounded by some 200,000 Palestinian Arabs.

The city had a continuous Jewish presence for thousands of years until the 1929 Hebron massacre, which resulted in dozens of Jewish deaths and the evacuation of the city's Jewish community. Israel gained control of Hebron in June 1967 during the Six-Day War. Control of the city was divided as part of the 1997 Hebron Agreement, whereby the Palestinian Authority controls 80 percent of the city in an area known as H1, while Israel controls the remaining 20 percent, H2, where most of the city's Jewish community lives.

Fleisher explained that the land in question was bought by a wealthy Turkish merchant named Avraham Yisrael Romano in 1836, who built a large house there. It was purchased from his heirs in 1912 by the Chabad-Lubavitch movement, which opened a Torah study institution there. The property was confiscated by the Turks in 1914, and in 1917, the British took control of the structure and turned it into their police headquarters.

During the terrible riots of 1929, the officers of the police headquarters stood idly by as Jews were massacred. The injured and murdered Jews were brought to the Beit Romano building.

When the Jordanians gained control of the area, they turned the building into the Osama bin al Munqiz school.

The property reverted back to Jewish possession after Israel's return to Hebron in the 1967 Six-Day War and after the murder of six students in Hebron in 1980.

An 'unexpected and dubious' move

Peace Now, an Israeli NGO that opposes the settlement movement, said the timing of this "unexpected and dubious" move appears to be connected to the U.S. presidential elections.

In response to separate petitions filed by Peace Now and the Hebron Municipality against the approval of the building permit for the construction, the state informed the Jerusalem District Court that the Civil Administration would issue a building permit in early November.

According to Peace Now, in October 2017, the Higher Planning Council of the Civil Administration approved the issuance of a building permit for the construction of a new neighborhood in the heart of Hebron in an area that previously served the Hebron municipality as the central bus station and was closed by the Israel Defense Forces for security reasons. In October 2018, the government took steps to finance the construction of the project. The Hebron municipality, as well as Peace Now, filed objections to the building permit, but the Higher Planning Council rejected them.

Peace Now and the Hebron Municipality filed petitions in the Jerusalem District Court, where they argued that the permit granted was illegal. A hearing on the petitions is expected to convene on Jan. 31, 2021.

Building plans should move forward 'regardless of politics'

Yesha Council CEO Yigal Dilmoni told JNS there is a necessity to build new apartments so that young couples can move in. "Without it, the community will simply die out," he said.

He added that when the Jordanians took over control of Hebron in 1948, it ethnically cleansed the Jews and took over the neighborhood, registering it as "enemy property."

When Israel took over control of Hebron in 1967, it mistakenly maintained that label, but now it referred to the Palestinian Arabs. The problem is that the land was always Jewish-owned.

Dilmoni decried the seemingly common misconception that Judea and Samaria building is a business and can be wantonly turned on or off. He said building plans in Hebron should move forward regardless of the politics on the ground and regardless of the outcome of the U.S. presidential elections.

Fleischer said that it has taken "almost 100 years for justice to be complete and for Jewish life to be rejuvenated here."

"What we've seen now is that the Prime Minister's office, the Israeli Knesset, the Civil Authority and the Israeli courts soon will rule in favor of Jewish rights in this ancestral Jewish society," he said.