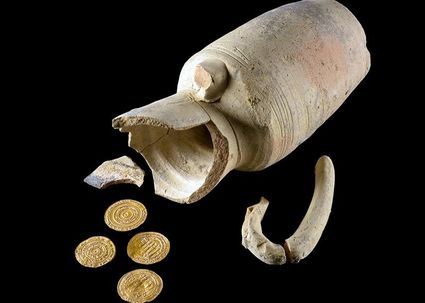 A 1,000-year-old juglet and gold coins from the Fatimid period, unearthed in the Old City of Jerusalem in Oct. 2020.

(Israel Hayom via JNS) - A small pottery jar containing four pure gold coins dating back to the Early Islamic period, more than 1,000 years ago, was unearthed during archaeological excavations in Jerusalem, the Israel Antiquities Authority (IAA) said on Monday.

The work was performed as part of the Jewish Quarter Development Corporation's plan to build an elevator designed and make the Western Wall Plaza more accessible to visitors.

The juglet was found by IAA inspector Yevgenia Kapil during preliminary digging at the site last month. Some weeks later, as excavation director David Gellman...