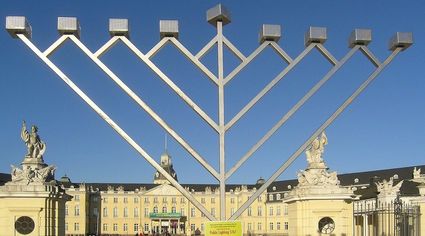 Not every commandment is given a rabbinical justification as clear as that of the mitzvah (commandment) of lighting the Chanukah lights (whether they are candles or oil, which are both acceptable). The rabbis explain that we light them in order to publicize the miracle of the holiday (pirsumei nisa in Aramaic, the language of the Talmud).

This symbolic act shifted during the time of the rabbis from the lighting of a solitary candle each night of the holiday to the lighting of an increasing number of candles throughout the eight nights of Chanukah, according to the custom of the House of Hillel. These lights were to be placed outside, in a public space, during the most heavily trafficked time of the evening. Today, the variety of practices range from carefully measured oil lamps to electric menorah s in department store windows to the lighting of 30-foot Chanukah menorahs in public squares in cities all over the world.

The requirement to kindle lights on Chanukah could easily be fulfilled with the lighting of a single light. This solitary light was all that was needed to symbolize the miracle of this late holiday–be it the divine intervention of the story of the oil, or the Maccabean victory. At an early stage, the rabbis delineated a mehadrin (better or more meticulous) way to perform the mitzvah, namely to allow for one candle per family member each day.

The mehadrin min hamehadrin (the most meticulous) method would be to do precisely what has since become the common practice–to begin with one candle and add a candle for each subsequent night of the holiday. Along with the development of how many lights would suffice to properly publicize the miracle, questions arose surrounding the actual placement of the Chanukah lights: How can the lights be placed in a way that maximizes their exposure to the public.

Not unlike the idea behind TV networks' "prime time," the rabbis were careful to determine the proper time for lighting the Chanukiyah (Chanukah lamp, also known as a menorah) as the one during which the largest amount of traffic would be able to view the miracle renewed in every house. During the 30 minutes or so that followed sunset, people made their way back home from the market or workplace, and this would be the optimum time to have passersby walk through what must have seemed like an endless number of kindled lights. The lights were to be lit outside in the courtyard, or if one lived on another floor, in a window so that people could see it.

Today, it has become common for people to place their Chanukah lights in the window for the neighbors to see; and one can even find some houses in Israel that have a special niche facing the front, in order to allow people to place their lit Chanukiot (the plural of Chanukiah) in a glass-enclosed display cases of their very own.

In a world that was not always tolerant of varying religious practices, the rabbis permitted the lighting of the Chanukah lights inside on a table, if one felt that one was in a she'at ha-d'khak (a time of danger). This teaches us that, while publicizing the miracle is the central reason of the holiday, publicizing the miracle to one's family is the essence, and further steps need not be taken if one perceives dangerous consequences.

Interestingly, even in the United States, where religious freedom is touted as one of the proudest achievements, the concept of she'at ha-d'khak has been tested, though not in the traditional manner of taking Chanukah displays inside during times of danger. One modern example: In Billings, Montana, in 1993, a small boy placed a Chanukah decoration in his bedroom window, only to have it destroyed when a rock shattered the window. In reaction to what was likely vandalism by members of an Aryan group, a campaign was started to have both Jews and non-Jews (the clear majority in Billings) decorate their windows with a hanukkiyah or with a picture of one. Ten thousand people joined in this campaign, and while several windows were still smashed, this town became quite an inspiration to many who appreciated its courage in the face of religious hatred and intolerance.

It is the Chabad-Lubavitch sect of Hasidic Judaism that has propagated the public display of hanukkiyot in cities throughout the United States, Canada, and Europe–and even to Moscow in 1991. Their large, angular hanukkiyot can be seen in public places across the world. These displays also have made headlines because of controversies they have generated concerning the separation of church and state.

In 1989, the issue came as far as the U.S. Supreme Court in Allegheny County vs. Greater Pittsburgh ACLU. The court was to decide whether the county violated the First Amendment's clause establishing that the government may not endorse or prohibit the free exercise of any religion. At issue was the displaying of a crèche (a Christian nativity scene) and a hanukkiyah on public property. The court ruled against the crèche but allowed the displaying of a hanukkiyah along with a Christmas tree, since the court perceived these to be secular symbols of religious holidays and therefore not an endorsement of any particular religious belief.

While this issue still causes its fair share of controversy (including issues particular to public schools), it has become a familiar sight to see even 30-foot hanukkiyot lit in places such as Central Park in New York City. In fact, even President George W. Bush made a point of lighting a hanukkiyah at the White House in 2001–using a menorah that made its way from Lvov, Poland, after the Holocaust.

Today, one can scarcely find a Jewish home without at least one hanukkiyah, and candles can be found in places as mundane as the local pharmacy. Local and national politicians, businesses from banks to bakeries, and even television stations are displaying hanukkiyot for publicity, solidarity, and sometimes as a response to over-zealous Christmas displays.

All of this public attention has not caused the family candle-lighting to disappear, however. On the contrary, more and more families are finding this simple ritual a very meaningful time for their families to gather. The miracle of Chanukah will continue to be publicized in the homes of Jews throughout the world, even as it is granted ever-increasing exposure in the public eye.