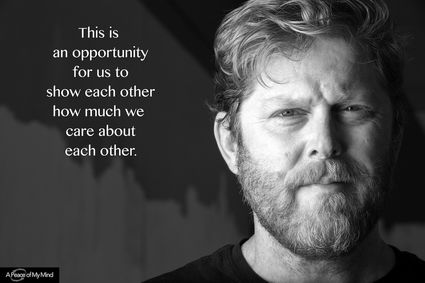 The Holocaust Memorial Resource & Education Center is hosting an exhibit titled "Uprooting Prejudice: Faces of Change." The exhibit is a collection of 45 photographs by photographer John Noltner, taken in the aftermath of George Floyd's death in police custody. Noltner is the founder of A Peace of My Mind, a multimedia arts project that uses portraits and personal stories to bridge divides and encourage dialogue around important issues. He went to the scene of Floyd's death to capture "the essence of the passion of the protestors," according to the Holocaust Center's press release. Accompanying the black and white photos of the individuals are their emotional thoughts in response to prejudice.

"You don't just see this exhibit. You feel it," said Lisa Bachman, assistant executive director of the Center. "We remember and reflect on the past for a reason, for a purpose. This is about humanity and treating everyone with respect," she stated in a format statement that she wrote.

Bachman responded to Heritage that the exhibit in no way honors Floyd. He is not mentioned by any individual in the exhibit and there are no photos of him on display. Bachman said people should see the exhibit before drawing conclusions.

In the format statement, she continued, "When we bring in traveling exhibits to complement our permanent Holocaust exhibit, our goal is to identify the common thread that ties the past to the present. As a result, we promote thoughtful reflection on the causes, events, and consequences of the Holocaust as well as the deeper issues at stake still today. We stimulate thinking about the nature of prejudice, bigotry, anti-Semitism, hate, and extremist ideologies that marginalizes people and leads to violence.

"The expressions and thoughts of each person photographed tells a story that has a very universal message," she stated in the HMREC press release about the exhibit. "There were too many bystanders during the Holocaust. We need to teach people today about being upstanders and not bystanders," Bachman told Heritage.

"With the rise in anti-Semitism, racism and many other forms of hate, we know this exhibit is more important now than ever."

The Florida Holocaust Museum in St. Petersburg mistakenly received criticism also, causing Executive Director Elizabeth Gelman and Chairman of the Board Michael Igel to issue this statement in part on their Facebook page: "For decades, the Florida Holocaust Museum has honored the memory of millions of innocents who suffered or died in the Holocaust, and we believe no comparisons should be made between other historical or current events and the Holocaust.

"As a non-partisan educational institution focused on the Holocaust and its lessons, we remain dedicated to teaching the inherent worth and dignity of all human life in order to prevent future genocides."

While the misconception that the exhibit is about Floyd is of concern to many, the "universal message" concept is troublesome to others, including Nazi hunter Efraim Zuroff, director of the Israeli office of the Simon Wiesenthal Center's Israel branch.

World Israel News interviewed Zuroff and several others who were outraged about the exhibit.

"We are facing a very serious problem of universalization when dealing with the Shoah, and this is something that's very, very important that we fight against," Zuroff told World Israel News.

American novelist, essayist and Distinguished University Professor Thane Rosenbaum told World Israel News, "The museum might believe that it has a broader mission to make the Holocaust relevant to the events of our day. But what it is doing instead is blurring moral boundaries and showing a profound disrespect for the dead - and I mean not just Jewish dead, but African dead. Have they hosted exhibits on the genocides of the Congo or Sudan? If not, then once again, close your doors, because the George Floyd death, and what it has come to symbolize, is in no way genocide, and to place it in the museum only serves to trivialize actual mass murder."

Linda Olmert, daughter of Holocaust survivors and a former board member of Yad Vashem, stated in an interview with World Israel News, "This is in fact nothing less than a false quest for universalism that criminally diminishes the intransigent uncompromising racism towards the Jewish people ...."

Is the Holocaust Center still true to its mission statement? Bachman stated firmly that it is.

"Our mission of the Holocaust Memorial Resource and Education Center of Florida is to use the history and lessons of the Holocaust to build just and caring communities free of antisemitism and all forms of prejudice and bigotry," she told the Heritage.

In a response to the UK-based Jewish Week, Bachman said, "We are educators and it is our duty to build bridges that move people from the unknown to understanding in an effort to build common humanity. Our goal is to make connections and create awareness for thoughts and ideas we may not have considered."

Local resident Dr. David Diamond sent emails and called the Heritage with his concerns. He said he spoke with Bachman as well as Prof. Rosenbaum, and suggests that a conversation must be held concerning the "distinctive purpose of why a Holocaust center ought to exist." He added, "We must have some introspection into what makes a Holocaust Center distinct from other entities promoting civic tolerance."