From homeless to Congress, Florida's Kat Cammack is ready to stand with Israel 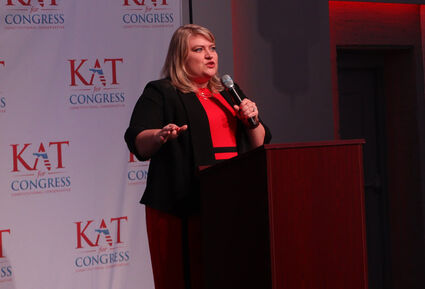 Kat Cammack during a campaign event.

(JNS) - In addition to Kat Cammack being one of a record number of Republican women elected to Congress this past election, she will serve as the youngest Republican woman on Capitol Hill when the 117th Congress begins on Jan. 3.

She easily defeated Democrat Adam Christensen, 57.1 percent to 42.9 percent, respectively, in the Nov. 3 U.S. House of Representatives race in Florida's 3rd Congressional District to succeed retiring Republican Rep. Ted Yoho, whom she served as his deputy chief of staff and campaign manager.

In an interview with JNS on Nov. 19, she called the aforementioned record "amazing" and expressed her enthusiasm about what she notes is "an incredible group of women."

She touted, "We have quite a diverse sisterhood forming here in the Republican Party in Washington."

The 32-year-old, who is married, was born in Colorado and had a tough road to get to Capitol Hill, first as a staffer and now as an elected member of Congress. In 2011, she and her family were homeless for several months after her parents were evicted from their ranch.

Yoho's eight terms in Congress consisted of staunch support for Israel, and Cammack is no stranger to the Jewish and pro-Israel community.

Her district, which is in northern Florida and includes the University of Florida in Gainesville, has an estimated 3,000 permanent Jewish residents.

"Only in America is that possible that I'm proud to represent the largest Jewish student organization in the country, Gators for Israel, and that's in my district," she said, adding that she looks forward to hosting the University of Florida pro-Israel group as a member of Congress.

She mentioned that her best friend from the Metropolitan State University of Denver, where Cammack went for her undergraduate degree in international relations, is Jewish. He visited her and her husband to celebrate her election, and according to Cammack, makes "the best challah."

Additionally, she said that a number of her campaign staff is part of "Gators for Israel," and that members of the Gainesville Jewish community supported her campaign.

Cammack's congressional campaign was backed by pro-Israel political action committees, including U.S. Israel PAC, or USI PAC, which contributed $2,500 ahead of the primary election and $1,000 ahead of the general election, according to the Federal Election Commission.

Her campaign was also supported by I-PAC JAX, Inc., a pro-Israel PAC that supports candidates out of Jacksonville. The group contributed $5,000 ahead of her primary, according to the Federal Election Commission.

Moreover, Cammack mentioned that she jokingly refers to a good friend of hers out of New York as "my rabbi."

"He is a rabbi, but he was instrumental in recruiting me for the Guardian Fund, which [helps elect] women and minorities and veterans to Congress," she continued, noting that he sits on the group's executive board.

On Iran nuclear deal and proxies in Syria

"Israel is an incredibly important part of our global context, and it is truly our strongest ally in the region. I don't think that there's any length that we won't go to protect and support our sister nation of Israel, so I would say it's a pretty strong relationship," she said.

Cammack has been to Israel once, visiting for 14 days in May 2013, four months after Yoho was first sworn in. She went as part of a chiefs of staff delegation organized by the American Israel Public Affairs Committee. She said it was a comprehensive trip that included traveling all over the country and meeting with business and industry leaders, in addition to elected officials.

As far as the 2015 Iran nuclear deal and what makes it poor foreign policy, Cammack laughed and rhetorically asked, "Where do I start?"

She cited a lack of inspections of Iran's nuclear facilities, the sanctions relief that was "feeding a regime that supports terrorism, and the killing of Israeli and American citizens."

"From top to bottom, the deal was bad," she emphasized.

While she expressed support for a strong U.S. military and for U.S. military assistance to Israel, she is against U.S. ground forces in the Middle East and elsewhere. The Pentagon recently announced a partial U.S. troop withdrawal from Iraq and Afghanistan by Jan. 15 - a timeline in which publicizing any timelines, according to Cammack, helps America's enemies.

She said, citing her master's education at the U.S. Naval War College, that "when you enter a conflict, you need to have an end goal in mind." She noted that the tribal culture in, for example, Afghanistan doesn't accept nation-building, a goal that critics such as Trump and Cammack, have objected to.

She also expressed support for withdrawing all U.S. forces in Syria, despite criticism that, like in Iraq and Afghanistan, the move could create a power vacuum for Iran and other U.S. adversaries. But she cautioned against immediate total U.S. troop withdrawals from Iraq and Afghanistan, though she would like to see them eventually leaving those areas.

Regarding Syria, she said that the situation there "is really turning into a global proxy war" with Russian involvement, in addition to "tremendous overreach from a constitutional perspective of our involvement there." She called for a global coalition to put pressure on Syrian leadership.

She called for a global coalition to combat extremism and terrorism in which "the United States cannot be the sole operators out there," continually monitoring for decades to come.

Cammack also blamed the United Nations for its "efforts to undermine Israel's role and place on the global stage, and continuing to vote against issues that are of most importance to Israel." She said she plans to be outspoken about this in Congress.

She said that education is critical in combating the BDS movement against the Jewish state. Organizations must educate members of Congress on both sides of the aisle about how and why Israel is crucial to the United States and the rest of the world, she stressed.

Cammack cited that, coming from an agricultural state, she has worked to educate "the agricultural community about the contributions of Israel to agriculture."

"I tell people all the time, they made the desert bloom," she said. "It's really important that we start every conversation from an educational standpoint, though it comes back to being willing to stand up and call out folks that are really coming from a place of ignorance."

She expressed hope that, as a member of Congress, she'll be able to take agricultural producers in the United States to Israel for educational tours, and "do some sharing of techniques and technology so that we can become better stewards of the resources that we have" and "really utilizing that cutting edge that Israel is famous for."