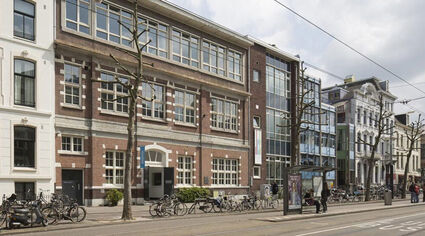 Luuk Kramer/Courtesy of the Jewish Cultural Quarter of Amsterdam

The Amsterdam building that used to house the Reform seminary and children's detainment facility where Betty Goudsmit-Oudkerk helped saved hundreds of Jewish children.

AMSTERDAM (JTA) - It was meant as an ode to one of the most courageous yet little-known rescue efforts of Jews during the Holocaust.

But a week after its publication, a Dutch-language historical novel is at the heart of a controversy over whether the author twisted the historical record in ways that risk distorting public understanding of the genocide.

Critics say "The Nursery," which is based on a daring rescue operation to smuggle hundreds of Jewish children out of Amsterdam and describes itself on its cover as a "real-life story," contains dozens of historical inaccuracies. Chief among...