Fresh out of college and making Aliyah 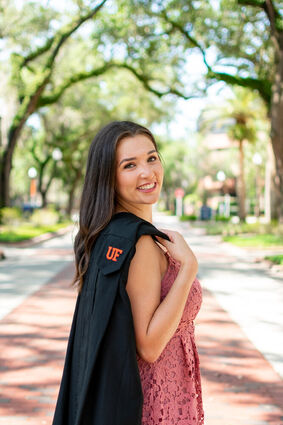 Kicking off a master's degree is a high point in any academically ambitious student's life. Between the academic stimulation, making new friends and soaking in the college life atmosphere, the beginning of the school year is usually a moment of great anticipation. While St. Petersburg native Elana Titen is experiencing butterflies in her stomach as she embarks on her MA in public health in Israel, she does acknowledge that this year is unique. Having just started taking classes at the University of Haifa virtually, she understands that things will be a bit different this year as the school has chosen to kick off the 2020-21 season with remote learning due to the pandemic.

However, since making Aliyah with Nefesh B'Nefesh in September, Titen, is still in good spirits and is relishing her new life in Israel. Since its founding in 2002, Nefesh B'Nefesh, in cooperation with Israel's Ministry of Aliyah and Integration, The Jewish Agency for Israel, Keren Kayemeth Le'Israel and JNF-USA, has facilitated the Aliyah of nearly 65,000 North Americans to Israel.

Below is a snapshot of a conversation where she talked about why she moved to Israel and what she hopes will be in store for her as she begins her new life in the Holy Land.

What made you want to make Aliyah?

I went on a gap year in 2015-16 for a program called Nativ, where I lived in Israel for nine months. This was my first time in Israel and ever since then, I always knew I wanted to come back and live here. After Nativ, I staffed two Birthright trips and did an internship program here. Each visit to Israel reinforced my decision to come here for good. After college at The University of Florida, I decided to make it official and make Aliyah.

There's a feeling here that I get of comfort that I never felt anywhere else. Israel instills in me a sense of ambition that I really enjoy seeing in myself. In Israel, I want to push to do something new and different.

How did your parents react when you told them you wanted to move?

They always knew it was coming, we just didn't talk about it until it happened. They're very supportive of my decision and accepted that I fell in love with Israel. When they saw my reaction after I visited the first time, they knew me making Aliyah would happen at some point. And now, they're excited to have a reason to come to visit.

Did you grow up in a Zionist home?

Yes. Israel was spoken about a lot at home and being Jewish was a big part of my identity when I was a kid. My mom really emphasized it. I also have two older sisters and we all went to Jewish sleep-away camps. I went to Camp Ramah, which really taught me to value Jewish community and Zionistic ideals.

What are your plans? Why Haifa?

I graduated from the University of Florida in May and earned my bachelor's degree in Family, Youth and Community Sciences. I'm very interested in childhood trauma and bringing awareness to that. As I spoke with my professors, a couple recommended studying public health so I can learn more about that subject. I then researched public health programs in Israel and Haifa was the only program that is accredited in the US and is offered in English. I loved that and thought it would give me a lot of flexibility in terms of what I wanted to do with my education in the future. The professors at Haifa were so open to answering all my questions and were very kind that during the application process so it was difficult to not accept the offer to study there.

I think public health is a huge factor in childhood trauma and I want to learn about children on a holistic level. I wanted to understand how a child's environment, its access to public health and connection with their family and communities can contribute to their well-being.

Did making Aliyah during a pandemic concern you at all?

It didn't concern me. I always wanted to make Aliyah anyway and wasn't going to delay that because of the pandemic. Actually, while making Aliyah now, everyone has been nothing but supportive and they've reached out consistently to make sure I didn't need anything. Just recently, for example, my neighbors made us banana bread during the lockdown. These little tokens show how Israel is such a warm, close-knit community.

Where are you now?

I'm living in Tel Aviv for now as the university will conduct remote learning for the time being. I hope that changes next semester, but for now the silver lining is that I'm staying in Tel Aviv and will be close to my family that lives in Israel.

How has the first week of school been so far?

I'm taking classes like biostatistics, the Israeli health system, human rights, epidemiology, and global public health. I'm very much a school-oriented person, so this is very much up my alley. So far my favorite course is epidemiology - I really don't know much about it, but I'm looking forward to soaking in this new information. So far, I've been very impressed. They've been nothing but organized and communicative about the program, classes, and their expectations of us, which I'm very grateful for. I even met a classmate on the beach last week, which was even more of a treat since I'm currently living in Tel Aviv and almost everybody else is in Haifa.