What's in a jean jacket and the Jewish Pavilion? 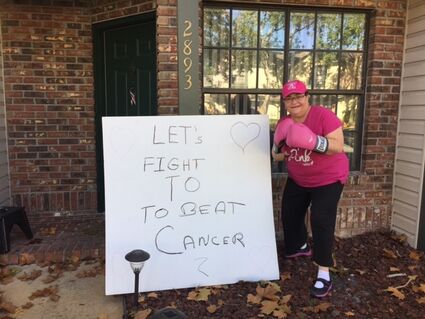 Dolores Indek fighting for the cure in her pink boxing gloves.

What do a jean jacket and breast cancer have in common? Dolores Indek and the Jewish Pavilion.

Indek made a successful bid at the Jewish Pavilion auction for a custom jean jacket and her support can be seen whether from the front of the jean jacket or the back of it.

A little bit of a back story: The Jewish Pavilion had an online auction this year instead of its in-person gala. They received lots of great items and the auction was successful. One item donated in particular caught Indek's eye and that was a denim jean jacket that had been custom designed and created by Marlene Adler. This jacket wasn't the correct size and Adler said if someone wants to bid then she would make the jacket to their specifications. Those were the magic words for Indek - who loves bright colors, which her new jean jacket reflects.

Indek has unfortunately lost several friends to breast cancer. Feeling very fortunate not to have to go through the illness herself, she does make it a point to do as much as she can for breast cancer awareness. 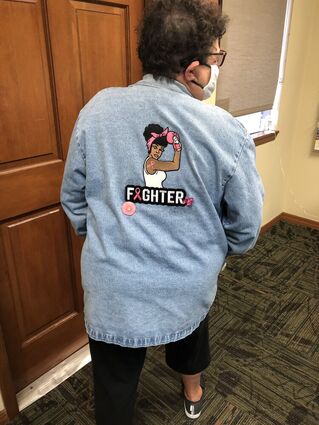 Indek shows 'Rosie the Riveter' on the back of her new jacket.

October was breast cancer awareness month. The Jewish Pavilion's auction was also in October and it gave inspiration for the design of the jean jacket. Indek works throughout the year with organizations dealing with breast cancer. At Halloween she stood in her neighborhood holding a sign for all to see that said "Fight For The Cure!" Since pink is the chosen color for supporting breast cancer awareness, Indek has her own pair of pink boxing gloves, and prior to covid she was taking boxing lessons at her gym.

The jacket, which Marlene Adler donated to the Jewish Pavilion auction, was personalized for Indek. Some of Indek's own jewelry was used on the jacket. "Rosie the Riveter" is shown on the back of the jacket wearing pink boxing gloves and a pink bandana in her hair with the word "Fighter" below. When Indek wore it to show her friends they loved it. This jacket accurately describes Indek as she works tirelessly throughout the year.