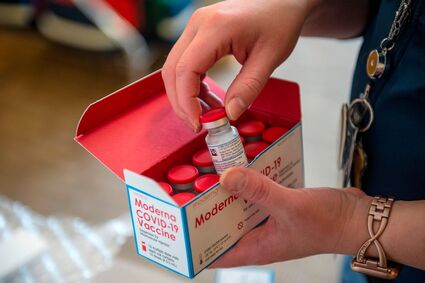 A nurse unpacks Moderna COVID-19 vaccines in Boston on Dec. 24, 2020. The Moderna vaccine is the one that a New York clinic is under investigation for giving to members of the general public.

(JTA) - When David first saw the advertisement on his local Long Island community Whatsapp group inviting people like him and his wife, both over 65, to sign up to get the COVID-19 vaccine, he was skeptical. The ad linked to a nondescript Google form that asked him to answer a few questions and submit insurance information.

"At this point I got suspicious. Is this an attempt to steal my identity? A scam?" he said in an email sharing his experience with the Jewish Telegraphic Agency.

After doing some research, however, he found that the provider that created the form, ParCare Community Health Network, was well known and had contracted with New York City's health authority to administer coronavirus tests to the Orthodox Jewish community.

Days after submitting their information, David and his wife headed to ParCare. On Dec. 24, the couple, who are not healthcare workers, drove to one of the network's facilities and received what they were told was the coronavirus vaccine - as well as a follow-up appointment to receive the second dose in January.

Whether and how David will receive that second dose, required to maximize the efficacy of the Moderna vaccine he received, is now unknown. That's because days after his vaccination, the state announced a criminal investigation into ParCare over allegations that the Brooklyn-based healthcare provider fraudulently obtained the vaccine and distributed it to members of the public, in what appears to be the first inquiry into potential vaccine fraud in the United States.

"Anyone found to have knowingly participated in this scheme will be held accountable to the fullest extent of the law," New York State Health Commissioner Dr. Howard Zucker said in a statement Saturday announcing the investigation.

A representative for ParCare said Sunday that the network had "proactively" returned its vaccine supplies to cooperate with the state health department.

"We will be working with the state to ensure that we provide the second dose for our patients," ParCare said in a statement. "We will do everything in our power to make sure that the state understands that our patients are our priority and that everyone receives their second dose accordingly."

State officials did not answer questions Sunday about how they planned to handle the second doses of people vaccinated by ParCare. Moderna's clinical trial found that a single dose was 80 to 90 percent effective, compared to 94 percent for the two-dose vaccination.

David - who asked to use an alias because he feared repercussions for speaking about his experience - said he was anxious that he would have to go without a second dose because of the investigation into ParCare. He issued a plea on behalf of other patients who had been given the vaccine's first dose: "Please do not leave them in a lurch and authorize their follow-up shot."

It's unclear how many people are in David's position. BoroPark24, a Yiddish news service, reported on Dec. 21 that ParCare had obtained 3,500 doses of the Moderna vaccine and would vaccinate 500 people that day.

A representative for the network told JTA that the vaccines had been properly obtained and shared what it said were a packing slip and an email from the state health department showing that 2,300 vaccine doses had been delivered to ParCare in Monroe, New York, the upstate town that includes the Hasidic village of Kiryas Joel.

But it's clear that those vaccinated by ParCare include prominent Orthodox leaders. Rabbi Hershel Schachter and Rabbi Mordechai Willig, both head teachers at Yeshiva University, were vaccinated at ParCare last week, and the network tweeted a video of their vaccinations. Neither Schachter, 79, nor Willig, 73, is a frontline health care worker or nursing home resident or worker, the two categories currently eligible for vaccines.

On Sunday night, Schachter, who has been an outspoken leader urging compliance with pandemic guidelines, said he had been told that his vaccination was above board.

"If either of us would have been told that this was inappropriate, that it wasn't legitimate, we would not have done that," he said before delivering an online Torah lesson.

ParCare advertised that it would offer vaccines to people over 65 and with preexisting health conditions. But one Manhattan physician said he had reason to believe that people far younger had been vaccinated.

Dr. Mark Horowitz, a family physician with some patients in the Orthodox Jewish community, said he had seen a 36-year-old patient last week who said she had received a COVID-19 vaccine in Brooklyn the previous day, despite not meeting state vaccination standards. Horowitz tweeted about the patient three days before the state announced its investigation into ParCare.

Horowitz said he found ParCare's alleged misconduct "morally repugnant," especially as he said he sees patients with COVID-19 but has yet to receive the vaccine.

"I have little, if any, sympathy for people who jump the line, but I think the greater blame goes to the operators of this facility," he said.

That's who state investigators appear to be scrutinizing. The Centers for Disease Control's vaccination program provider agreement, which New York requires private practices to sign, tells participants to "administer COVID-19 Vaccine in compliance with all applicable state and territorial vaccination laws." Breaching the agreement risks suspension or termination from the program and federal criminal and civil penalties.

Gary Schlesinger, the prominent Hasidic businessman who owns the ParCare network, shared a picture of his own vaccination on Twitter late last week. He deleted his post after the state announced its investigation.

David, the man who was vaccinated at ParCare, said he assumed ParCare was distributing the vaccine early because of COVID-19 rates in Orthodox communities. Both New York City Mayor Bill de Blasio and New York Gov. Andrew Cuomo have called attention to lapses in the communities in compliance with rules designed to curb the spread of the disease.

And the city has collaborated with ParCare as it has worked to manage the pandemic. In October, the NYC Test & Trace Corps, the city's contact tracing unit, announced that it was expanding the provider's COVID-19 testing capabilities and offering additional resources and supplies.

But while Orthodox Brooklyn experienced some of the first major outbreaks of the pandemic in the United States, neighborhoods with the most Orthodox Jews are not on the city's list of areas experiencing the steepest toll throughout the entire pandemic. That list, de Blasio said last week, will determine where vaccines are sent first once vaccinations begin for the general public.

Dr. Aaron Glatt, the chief of infectious diseases and hospital epidemiologist at Mount Sinai South Nassau on Long Island and an assistant rabbi at the Young Israel of Woodmere, a large Orthodox synagogue, declined to comment on the ParCare investigation. But he said that he, along with other medical professionals, had no alternative but to follow state distribution schedules.

He also said that he personally has fielded many inquiries into vaccine availability since the first federal approvals earlier this month.

"People are very anxious, very excited, very interested in taking this vaccine," Glatt said. "I think the sole concern at this time is 'how can I get the vaccine.'"