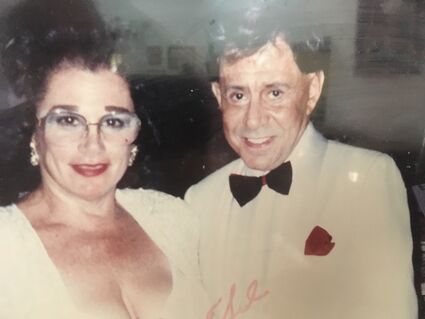 I performed as a dancer but mostly as a vocalist. In fact, this was the first New Years Eve that I haven't performed.

I will always remember the year 2020 as the worst I've ever spent in my long life, mostly quarantined at home watching "Dr. Phil" on television and over-eating! (Oy vay!) Maybe this year 2021 will be back to normal. (If I don't gain too much weight!).

Here is a photo of me and Eddie Fisher working on one New Years Eve. (He had just left his wife, Debbie Reynolds, for a nice Jewish girl (converted) named Elizabeth Taylor. That's me with Eddie in the photo, not Elizabeth. (Oh shut up!)

Also, speaking of "Jewish," super-talented MICHAEL FEINSTEIN, who lived with Ira Gershwin and his wife for a while, was a friend of mine, and also inscribed one of my CDs.

He wrote, "What a joy to hear such beautiful singing of great songs so intelligently interpreted. I'm a fan, Gloria."

I read this in the World Jewish Congress and pass it along to you: "The WJC applauded a Greek court's decision to convict the leadership of the country's Golden Dawn national political party for heading up a criminal organization. The court also convicted a party member of murder, and 15 others of conspiracy in the case.

At its peak in 2015, Golden Dawn received as much as 7 percent of the national parliamentary vote and still holds seats in the European Parliament. Other than those acts at the center of the court's deliberations, the group is notorious for its history of anti-Semitic hate speech and desecration of Jewish sites across the country.

The WJC released the following statement in response to the recent decision: 'The World Jewish Congress, in partnership with the Central Board of Jewish Communities in Greece, has consistently opposed Golden Dawn and called for its removal from the Greek political system by legal means.'

This decision sends a clear message that Greek society does not tolerate hate and division.

We salute Greece's past and current political leadership for taking the necessary measures to eradicate this abhorrent group's platform for disseminating hate.

Extremist and neo-Nazi movements, and the rhetoric they expose, are not only a danger to Jewish communities and other minority groups, they also constitute a severe threat to the basic fabric of our society through their constant challenges to the rule of law.

This decision is not only historic for Greece, but for all those who support democratic values. The WJC hopes that legislation and policies that promote education, respect and tolerance will be implemented around the world so movements like Golden Dawn will never find fertile ground to grow.

(I know you are as concerned as I am by the many deplorable threats that our communities have had to endure over the past year, including the spread of COVID-19 conspiracy myths and the rising tide of anti-Jewish and anti-Israel hatred.

And as global restrictions imposed as a result of the pandemic begin to ease (hopefully), violent anti-Semites continue to seek ways to harm Jews. We must draw a line in the sand, here and now, and state clearly to the world: NO MORE! HATE STOPS NOW!

How to report hate?

You can talk to law enforcement: Get help on reporting hate crimes to your local police or FBI at justice.gov/hatecrimes/get-help-now.

You can urge Congress to take action: Call on the U.S. Congress to pass the NO HATE Act, legislation that will improve the FBI's ability to accurately track hate crimes in America. AJC.org/NoHate or even report Hate on social media. (You can make a cdifference.)

Join the Federation for an unforgettable experience at the first-ever virtual International Lion of Judah Conference. It will be on Jan. 24th-25th. Registration is open now for the Conference, the premier gathering of dynamic, philanthropic Jewish women. For further information, phone the Federation at 407-645-5933.

Allengang Entertainment presents A Tribute to Roy Orbison, Buddy Holly, and Fats Domino on Saturday, Jan. 23at 2 p.m. and 7:30 p.m. These three legends will astound you with their look, vocals and musical talent during the show they never gave. An incredible "live" musical tribute to the greatest rock 'n' roll performers of all time! Backing these three legendary impersonators in one spectacular show is THE CREW, all live no tracks. You have to see it to believe it! Phone 407-323-5600 for further information. 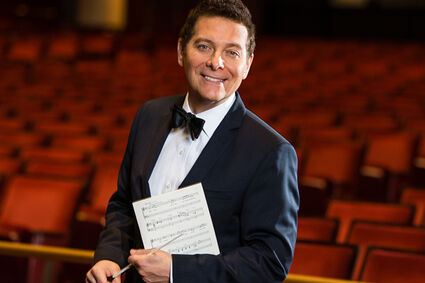 They are currently registering participants for the next grief support group, Exploring grief through a Jewish Lens, facilitated by Rabbi Mo Kaprow from VITAS Healthcare. Although they are currently on hold due to the coronavirus, they can add you to the list and keep you updated. Please contact Nancy Ludin at 407-678-9363 or email nancyludin@jewishpavilion.org for more information or to register.