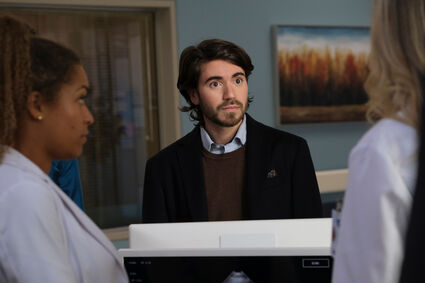 Noah Galvin as Dr. Asher Wolk on 'The Good Doctor.'

(JTA) - Writer and producer David Shore didn't have to look far when developing a key new character for his hit ABC-TV series "The Good Doctor." He went straight to his nieces and nephews, the children of his Orthodox rabbi brothers.

The show, which returns with new episodes on Jan. 11, focuses on Shaun Murphy (played by Freddie Highmore), an autistic doctor who is able to diagnose complicated illnesses and come up with creative treatments. But its fourth season introduced some new faces.

"We wanted to bring in some doctors junior to Dr. Murphy, some characters who have less experience than him, people he can serve as a guide to," Shore, 61, said in a telephone interview with the Jewish Telegraphic Agency. "We [the producers] spent a lot of time discussing various characters."

Enter Dr. Asher Wolk (Noah Galvin), who was raised in a haredi Orthodox environment but no longer believes in God. Shore's two brothers are Orthodox rabbis affiliated with the Aish Hatorah yeshiva based in Jerusalem.

"I've always been fascinated by religion and the lack of religion," Shore said. "Some of [my brothers'] children are no longer religious, and I am fascinated by their experiences.  I think it's very interesting that they were brought up in one world and chose another."

Wolk's character is only three episodes old - the season was split into two parts because of COVID-related delays - and Shore is reluctant to give much more away about him. So far there's been no indication of what caused Wolk's break with his family, though the concept that he is gay may have precipitated the split. Wolk has, however, reluctantly uttered a Hebrew prayer at the request of a dying patient.

He is also the product of a bit of familial inspiration.

"I love all my nephews and nieces," Shore said. "[Wolk] doesn't represent them but was inspired by them."

Shore, who also created the medical drama "House," said he feels responsible to care for all the show's characters – but the feeling is a little different with Wolk.

"This character has traits I'm more familiar with than others in the writing room. So I do feel more of a sense of responsibility and affinity," he said.

While Jewish doctors as regular characters on mainstream TV shows are not unique, they are somewhat rare. Murphy's mentor on "The Good Doctor" is Dr. Glassman (Richard Schiff), who presumably is Jewish. In "House" (about another physician with extraordinary diagnostic skills), Dr. James Wilson (Robert Sean Leonard) was Jewish. Neither talks about their rdly Jewish. "Chicago Med," however, has a recurring Black Orthodox Jewish character, Dr. Isidore Latham (Ato Essandoh).

A doctor raised Orthodox who not only rejects his upbringing but the very existence of God is even rarer - to nonexistent. Was there any thought about possible negative feedback? Shore says no.

"I would be very disappointed if that happened," he said. "I have prided myself throughout my career and through many shows and characters of various religions always presenting a respectful exploration of their beliefs, whether I agree with them or not."

Shore grew up in a Jewish household in London, in the Ontario province of Canada. He graduated from law school and spent six years with a small Toronto firm, where he mostly focused on municipal and tax law, zoning work. But he decided television was his calling, moving to Los Angeles in 1988 with the cautious support of his parents.

"They would tell you they were nothing but supportive, but basically they were nervous," he said. "I'm sure many people thought I was crazy.

"Law is a full-time job and I wasn't disciplined enough to come home [from a day in a law office] and try writing. Looking back on my life, my analysis is that I was aware it was a crazy decision. But my thinking was if I fail it's not the end of the world. I still have my legal degree. I didn't burn any bridges when I left."

It took Shore a year to find an agent and another year to get his first show assignment. Shortly after came his debut in a writer's room on a show called "Due South."

For his successes, principally with the two medical dramas, Shore was honored by the University of Western Ontario in 2018. He was given an honorary degree in - wait for it - law.