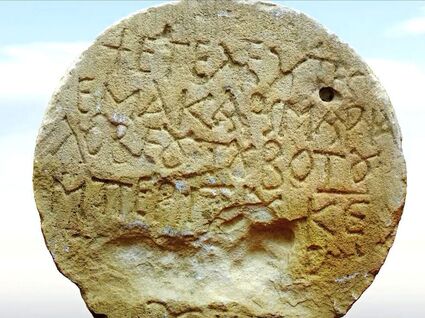 The ancient stone found in the Nitzana National Park in the Negev in Jan. 2021.

(JNS) - A stone bearing a Greek inscription from the end of the Byzantine period was discovered last weekend in the Nitzana National Park in the Negev, the Israel Antiquities Authority announced on Wednesday.

The flat, round stone was used as a tombstone in one of the cemeteries surrounding the ancient settlement, the IAA said.

It was found by Nitzana Educational Village director David Palmach, who came upon it while clearing hiking paths in the park. According to the IAA, Palmach noticed an inscription on the stone, which was later deciphered by Leah Di Segni of the Hebrew University in Je...