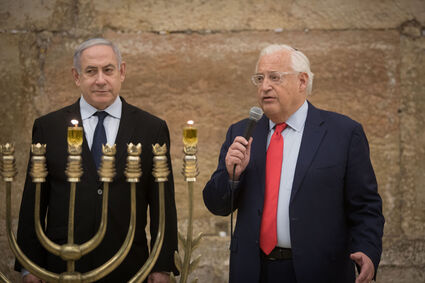 (Israel Hayom via JNS) - One winter morning in 2017, a young man arrived at the Kesher Israel synagogue in the heart of Washington. He prayed fervently, as if his heart was filled with a special request. His tallit bag bore the name "Friedman," and it was the only time he had come to the famous synagogue. That same day, his father, David M. Friedman, was undergoing Senate confirmation for his appointment as U.S. ambassador to Israel.

In the best tradition of Jewish divisiveness, powerful forces were aligned against Friedman Sr., led by the J Street lobby. But a few weeks later, in a ceremony organized by B'nai B'rith International, Friedman made his first speech as ambassador.

"If you were wondering about my middle name, Melech, it's not because my parents expected great things of me, but because my grandmother was named Malka [the feminine version of the name]," he began, causing the audience to double over with laughter.

His son's prayers were answered - not only was the appointment approved, but David Melech Friedman became the most influential U.S. ambassador in the history of U.S.-Israeli relations. And not only through the steps known to everyone - stamping down Iran, recognizing Jerusalem as Israel's capital, relocating the U.S. Embassy in Israel to Jerusalem from Tel Aviv, recognizing the Golan Heights as Israeli and shaping the Trump peace plan - but also through endless moves that never made headlines in the dramatic Trump era. For example visits to the Golan Heights, to Ariel in Samaria and the City of David in Jerusalem - all of which would have been inconceivable prior to Freidman's arrival.

For decades, the American consulate on Jerusalem's Agron Street served as a conduit through which the Palestinian Authority would spread its lies and incitement into Washington. Friedman shut down the consulate and turned it into the official residence of the American ambassador in Jerusalem.

After four intense years, Friedman sat down with Israel Hayom for an "exit interview."

Q:  Now that this journey is coming to an end, what are your feelings? Your thoughts?

A: I haven't looked backwards yet, but it's starting to sink in, especially after being at the Knesset and being with the Cabinet [last week] and people saying nice things about me. It's been the honor of my life, and I wish I could keep this job forever. I'm very proud of what we've accomplished, I feel good about the last four years. It's not just me, it includes the entire team both in Washington [and here,] from the president on down.

Q: Discuss one moment the public doesn't know about that will stay with you for the rest of your life.

A: I have hundreds. There are so many things that we've done that nobody really knows about. One example, a few years ago the president was meeting with [former British Prime Minister] Theresa May, and she said to him, "You know, there are these really good people in southern Syria. They're called the 'White Helmets' [a humanitarian aid group that rescued civilians during the Syrian war] and they're going to be massacred by the Syrian military. They need to be extracted and saved, and we need your help, because the only people who can help them are the Israelis.'" The president responded, "No problem, I'll tell David to take care of it, don't worry."

For a week I didn't work on anything else. Only the IDF had the capability to extract them from Syria safely and send them to Jordan, but from Jordan they would have to have an exit ready to other countries that would be willing to take them. All the countries we reached out to at first opposed it. Israel was the only one that didn't make conditions. I worked on it day and night, really obsessively. It was very complicated. In the end, we were there at the border one night. Israeli soldiers met the White Helmets, who were with their wives and children, and were waiting with baby formula and blankets. It was one of the most satisfying things I did over the four years.

Q: There have been claims that Trump wasn't involved in details, and that it was effectively you and Jared Kushner and other advisers who were leading the president.

A: The president made every decision. I provide him with advice, I provide him with thoughts, with ideas, with opportunities. He's always in control and he made these decisions. He asks the right questions, and I think many times got to the right place. My relationship with him goes back 20 years, and it was founded on the basis of real trust. That gave me a head start over other people, and of course, I had access to the president, but there was never a decision that he made where he didn't make sure he was fully briefed and understood the subject. He was the decision-maker.

Q: You and the administration led a series of well-known, historic decisions that led U.S.-Israeli ties to an unprecedented place. Looking back, what Middle East are you leaving for the new administration that is different from what you got four years ago?

A: I think that when we came into office the relationship was fractured. The going-away present from the Obama administration was U.N. Resolution 2334. It was a gut punch - the idea that the United States would support a United Nations resolution that considered all of Judea and Samaria, Jerusalem, the Kotel [Western Wall], to be illegally occupied territory was very, very painful.

Four years later, I think the relationship is stronger than ever. I think we all want to see a resolution to the Israeli-Palestinian conflict, but we want to see it done on the basis of just a dispute between two people with competing claims to territory that should be resolved as disputes get resolved, not that one side is an illegal occupier and the other side is a perpetual victim.

In terms of the Abraham Accords, that's transformational. It's enormously important to regional stability, it's important to Israel. It's just as important to the Muslim countries that have normalized with Israel. It has the potential to change the Middle East for the next 100 years. But it's early, these are young agreements, and they shouldn't be taken for granted.

Q: What do you fear could set the process back?

Q: You warn that if the United States rejoins the JCPOA, it will worsen the situation in the region. But on Biden's side, they say that without a deal in place, Iran is now closer to a number bomb because it is enriching uranium to 20 percent and the Iranians are starting to operate advanced centrifuges.

A: We're not in worse shape, for reasons some of which I can't discuss. If they [the new administration] don't know it already, they'll know we're not in worse shape - we're in better shape. And we'll be in much better shape if we keep the sanctions on. I'm not suggesting we shouldn't try to make a deal with Iran. But if we make a deal with Iran, let's make sure they have zero opportunity for nuclear weapons.

Q: What advice do you have for the Biden administration?

A: I really wish the Biden administration success. America has a lot of real problems that need to be addressed. We left the Middle East in a pretty good place. Normally, you come into office and the Middle East is always on fire. This time, it's not. I would say, this is not where you ought to be focusing your attention. This is not where I would be trying to bring change. This is one of the few places in the world where change is going to be counter-productive.

Q: The relationship between Trump and Prime Minister Netanyahu was excellent, but what advice do you have for us when it comes to preserving bilateral support for Israel, which is a vital asset?

A: I think Israel has to respect the Democratic views because that's the view of the American democracy right now. At the same time, the same courtesy should be extended to Israel. There are a lot of Democrats that support Israel. I think they need to get away from the politics and just kind of understand the American interests here. These are not populist interests, these are interests that really go to American security, American values. I think there's a pathway to bipartisan support. I certainly intend to work on that.

Q: Prior to your appointment and even after it people tried to delegitimize you, especially on the far left of the Jewish community. How did that make you feel?

A: It was a very sad moment for me. Not because I feared that I wouldn't get the job, but it was sad to me that the Jewish community in the United States could not see clear to permitting a right-wing [Jew] being appointed to reflect the views of a right-wing president. I felt that was really unfair. When President Obama appointed the previous ambassador [to Israel], Dan Shapiro, who as much as my views go one way, his views go the other way, I think the Jewish community generally supported Shapiro without qualification. He loves Israel, he's the pick of the president, and he should be permitted to take his post. Nobody on the Jewish right complained about Shapiro. I think there was a respect among the Jewish community. When that same courtesy was not extended by the Jewish left toward a right-wing candidate, it saddened me because it showed me there were really deep rifts in the American Jewish community that I did not appreciate up until that point. I still don't know how to heal that. I do want to see the American Jewish community come together. There are certainly common values and common interests that ought to unite us.

Q: What message would you like to send to the Israeli people?

A: Don't take for granted being alive in Israel today. When you think about the history of the Jewish people, what a blessing it is to be part of Israeli society in 2021, to be at this point. It's sometimes hard to see what you have when you're up close. But I've had the benefit of both being in Israeli society up close and also being able to see it from 6,000 miles away as an American. I hope that perspective is something that Israelis themselves can have because they're living history. Every Israeli today, just by living here, is making a massive contribution to the future of the Jewish people and the future of Judaism. It's an awesome responsibility - you're a chain in a 3,000-year continuum and you have the responsibility of bringing it forward to the future.

This article first appeared in Israel Hayom. It was edited for space.