'The ways of Torah are peaceful': Why football presents a dilemma for American Jews 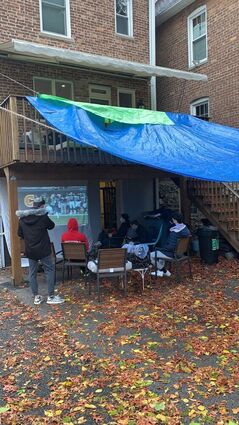 Yonah Rosenfield and friends watch football outside under a tarp.

(JTA) - Rabbi Josh Feigelson remembers the moment that football lost its magic for him.

It was Oct. 20, 2013, and Feigelson was eating dinner with his family at Ken's Diner, a kosher restaurant in Skokie, the Chicago suburb where they live. A TV was playing a football game between the Green Bay Packers and the Cleveland Browns.

Feigelson, who grew up in the football-crazed college town of Ann Arbor, Michigan, was a longtime fan of the sport, and his then preteen kids had taken up the mantle, participating in fantasy football leagues and following news about the NFL's 32 different teams.