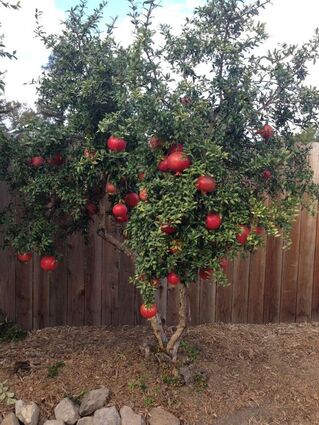 Once again, Laurence Morrell, aka "Last of the Jewish Red Necks," came through. He gladly assisted both the Temple Israel educational school, MAGAL, to have both a fundraiser and a way to celebrate Tu B' Shvat in January. He did the same with the Jewish Academy of Orlando. Both were very successful events.

Morrell, who knows where to find plants, located a source of pomegranate trees from the nursery Green Sea Farms, located outside of the very small South Central community of Zolfo Springs. The nursery owned and operated by Cindy Weinstein was very happy to assist by selling various varieties of pomegranates for this effort. Zolfo, which is located about 220 miles south on highway 66 off of US 17, is one of the very few nurseries growing pomegranate trees for sale.

Leave it to Morrell to know about these things. He and daughter Tami drove down to the Green Sea Nursery to pick up the ordered trees - 54 for Temple Israel and 84 for the Jewish Academy - and deliver them as promised.

"Then Temple Israel and the Jewish Academy sold the trees to the parents of the children at TI and JAO at a realistic cost greater than their cost. Thus they made quite a lot of money for little effort on their part," said Morrell.

Along with the trees, was a packet of information consisting of a description of each pomegranate variety provided, proper care for the tree, a pamphlet explaining the relationship between Tu B'Shvat and the environment as described by the ancient rabbis by the concept of Bal Tashchit - saving the environment. As Rabbi Hillel explained, "If we do not look after the natural environment, then who else will do so? If not now, when?"

The event was a total success as expected both from the sale of the trees and helping of the environment by planting trees. For next year, Morrell is searching for a source of fig trees to plant to celebrate Tu B'Shvat. In the past he has located olive trees, this year pomegranate trees and for next year fig trees.