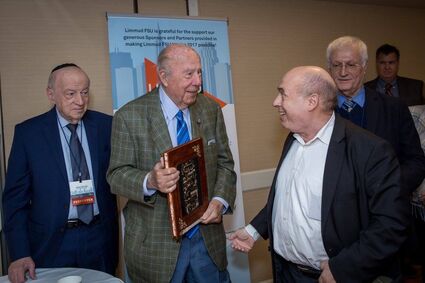 George Shultz, with book, at a 2017 Limmud FSU conference with, from left to right, Julius Berman, Natan Sharansky and Chaim Chesler.

TEL AVIV - On Feb. 11, 1986, Soviet refusenik Natan Sharansky - freed after enduring nine years in Russian prison on false charges of treason and espionage - stepped off a jet that had carried him straight from Germany and out into the Israeli sunshine.

"It was a very dramatic day, starting in a Soviet prison, then meeting my wife in Berlin after 12 years, then finishing at Ben Gurion Airport, and finally visiting the Kotel" in Jerusalem, said Sharansky, recalling the events of 35 years ago as if they were part of a John LeCarré spy thriller. "I was so overwhelmed, I thought maybe it was a...