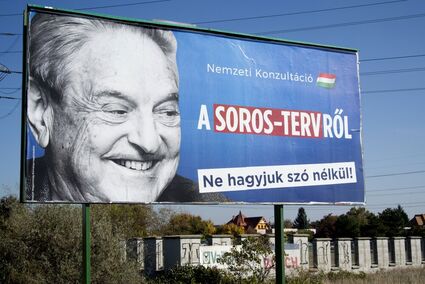 This 2017 billboard in Budapest was part of a Hungarian government campaign to "demonize George Soros," the report said.

(JTA) - Authorities in Poland, Russia, Hungary and some lawmakers in Britain's Labour Party used anti-Semitism for political means, according to the Anti-Defamation League's anti-Semitism report on Europe published Thursday.

In Poland, presidential candidate Rafal Trzaskowski was the target of "antisemitic rhetoric" this summer during an election in which he lost to the incumbent Andrzej Duda of the right-wing Law and Justice party, ADL wrote in the report titled "Choosing Antisemitism: Instrumentalization and Tolerance of Antisemitism in Contemporary European Politics."