By Gabe Friedman and Philissa Cramer

Is Bonne Maman an anti-Nazi jam? The Internet wants to think so 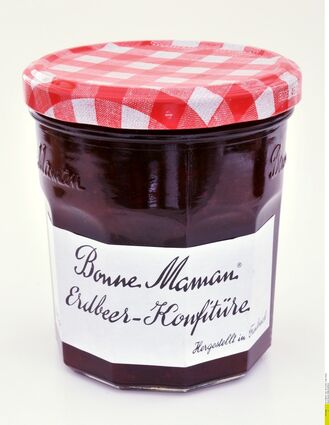 (JTA) - The heartwarming story has been hard to miss: A law professor is shopping at his local grocery store when he sees an elderly woman struggling to get her favorite jam from a high shelf. Why is it her favorite? "I am a Holocaust survivor," she says. "During the war, the family that owns the company hid my family in Paris."

Tens of thousands of people - at least - have shared the story since it began circulating on social media this weekend. It has prompted countless people to vow to buy only Bonne Maman-brand jam, whose 26 varieties are almost all kosher, in the future.

But is Bonne Maman, with its can't-miss red gingham jar lids, really an anti-Nazi jam?

The company, whose founding families are famously secretive, isn't taking any credit for the activity of its founders' families during World War II.

"The family prefers to maintain privacy and does not comment on inquiries about personal matters," Bonne Maman told the Jewish Telegraphic Agency in a statement.

Michael Perino, the St. John's University professor who originally posted the story on Twitter, told JTA that the incident happened on Sunday morning in his northern New Jersey grocery store. He said he was surprised by the woman's composure and ability to shop alone at her age, which he estimated to be late 80s or early 90s. He didn't ask for her name, not wanting to pry.

"It was a beautiful moment," Perino said. "When she gave the explanation, you know, it's one of these things where kind of your heart stops for a moment, because it's totally unexpected."

Bonne Maman, founded in 1971 by members of the Gervoson family, is based in Biars-sur-Cère, a town in southern France. Neither the town nor any of its inhabitants are listed on the registry of "righteous gentiles" that is maintained by Yad Vashem, Israel's Holocaust memorial and museum.

Nor is anyone with the name of the company's founding families in the database, which is comprehensive and thoroughly researched but does not necessarily include every possible person who might be eligible for it.

At least one person has publicly described his family's experience being sheltered in Biars-sur-Cère: A New Jersey man named Eric Mayer told the Jewish Standard in 2016 that he and his siblings had hidden there after leaving their parents behind in Germany. He even noted that the town, which he said had 800 people at the time he lived there, later became the home of Bonne Maman.

Some Internet sleuths seeking to verify Perino's grocery store encounter - or at least to rebut skeptics - noted that Mayer told the Jewish Standard that his sister had been with him in Biars-sur-Cère, suggesting that she might have been the mystery shopper. But the story says that Mayer's sister died prior to 2016.

Certainly, other Jewish children could have wound up in the same town. Many Jewish children who were being sheltered in Paris were moved to southern France after the Nazis invaded the capital city. Biars-sur-Cère is about a four-hour drive from Le Chambon-sur-Lignon, the French mountain town that is one of two municipalities honored collectively by Yad Vashem for its efforts to save Jews. There, about 2,500 Jews received shelter during the war. (One of them left the town more than $2 million when he died at 90 on Christmas Day.)

But Perino's story says the woman said her family was sheltered in Paris, more than 250 miles from Biars-sur-Cère. Jean Gervoson founded the company with his brother-in-law, Pierre Chapoulart; the Chapoulart family was already established in Biars-sur-Cère by the war. Gervoson died in 2018, his wife Suzanne in 2015.

Could the self-identified bubbe in the grocery store be confused about where and by whom she was sheltered as a child more than 75 years ago? Could the Gervoson or Chapoulart families have hidden Jews from Nazis and never gotten credit for it? Could Perino - who later thanked those who added details he had not - have asked a few more questions before posting his story to Twitter?

Yes, yes and, well, yes. But for some who appreciated the story, the facts may not matter.

"Please don't make me fact check the Bonne Maman story," Jennifer Mendelsohn, a journalist who is widely known for her genealogy sleuthing online, tweeted on Wednesday morning. "Can't it be like Santa Claus?"