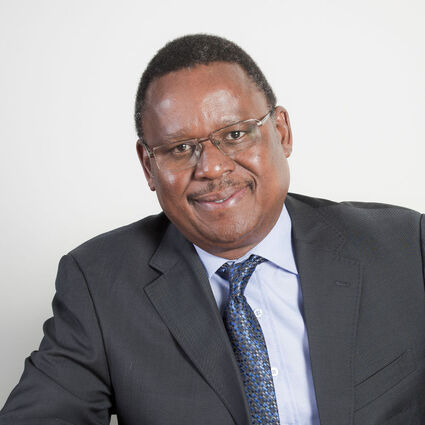 Rev. Frank Chikane of the World Council of Churches.

(JNS) - The World Council of Churches has gone full theological incitement against the State of Israel.

In a recent Zoom webinar with more than 300 Christian activists to promote a film about the former Latin Patriarch of Jerusalem and pro-Palestinian activism of Michel Sabbah, Rev. Frank Chikane, the moderator of the WCC's Commission of the Churches on International Affairs, went much further than the usual falsehoods about Israel's "brutality" toward the Palestinians. "We need to begin to say to those who support Israel to brutalize Palestinians that the blood of the people of Palestine will be sought from them because they collaborate by allowing this system to continue," he said.

Chikane's apparent incitement to violence clearly channeled Matthew's infamous curse in the New Testament: "His blood be upon us and on our children!"

This curse, calling for retribution in perpetuity against the Jewish people for the crucifixion of Jesus, resulted in the slaughter of hundreds of thousands of Jews through the centuries.

Indeed, Chikane, a South African priest, openly suggested that Israeli Jews were demonic. He said the Palestinians were "dealing with the same demons we dealt with in South Africa, except that in their case, the demons have invited many other demons to make their struggle much more difficult."

So Chikane's choice of words targeted Israel's Jews with the same genocidal incitement.

This shocking conflation of inflammatory falsehoods about Israeli crimes against humanity with the infinitely more incendiary charge of deicide is by no means new in the Christian church. It is part of what's called "supersessionism," also known as "replacement theology."

This is an ancient Christian calumny against the Jews, which over the past few decades has been revived and adapted to the Palestinian cause.

The doctrine holds that the Jews were stripped of God's favor because they denied the divinity of Jesus. Christians, therefore, inherited God's promises and became the "new Israel" while the Jews were damned.

This murderous doctrine was driven underground for a time by the Holocaust, but was given new life by the emergence of Palestinian Christian liberation theology. This fused the falsehood that the Palestinian Arabs were the original possessors of the land of Israel with theological, anti-Jewish supersessionism.

Such fusion gave the Palestinian Arab claim to the land of Israel the status of supposedly holy writ, turning the State of Israel into an ungodly interloper and its defenders into the enemies of God.

Giving rise to the patently ludicrous claim that "Jesus was a Palestinian"- whereas he was, of course, a Jew from ancient Judea - it has fueled grotesque Palestinian propaganda that presents the Palestinians as being "crucified" by the Israelis. This image provokes a visceral revulsion against Israel among some Western Christians, whose ignorance of Judaism and Middle East history turns them into the useful idiots of murderous incitement against Israel and the Jews.

The hybrid of Christian theological and Palestinian political demonization of Israel and the Jews has been pumped out for years by the Sabeel Ecumenical Liberation Theology Center in Jerusalem. The Zoom webinar was organized by Sabeel and other venomously anti-Israel Christian groups and activists.

This Palestinian "liberation theology" has been adopted wholesale by the World Council of Churches.

For decades, the WCC has promoted anti-Israel and anti-Zionist rhetoric and activism. Through its "liberation theology" propaganda, it has infused liberal churches with neo-Marxist, anti-capitalist, anti-West attitudes - thus placing a virtual halo over the anti-Semitism and anti-Zionism of the left.

As the Christian historian Paul Merkley has chronicled, the WCC played a key role in bringing about the anti-Zionist hate-fest in Durban, South Africa, a few days before 9/11, when representatives attending the U.N. Conference on Racism, Racial Discrimination, Xenophobia and Related Intolerance demanded that the United Nations denounce Israel for "systematic perpetration of racist crimes, including war crimes, acts of genocide and ethnic cleansing."

The Simon Wiesenthal Center has noted that, while the WCC has doubled down on Israel, it has made little or no criticism of the brutal regimes in places such as Cuba, North Korea, Venezuela, China and Iran.

When Islamic extremists kept blowing up Coptic churches in Egypt, traumatized Copts said that the WCC was apparently too preoccupied with Israel to give them support.

Indeed, its flagship project, the Ecumenical Accompaniment Programme in Palestine and Israel, has sent at least 1,800 volunteers to serve as observers in Jerusalem and the "West Bank" over the past couple of decades.

The International Holocaust Remembrance Alliance states that "drawing comparisons of contemporary Israeli policy to that of the Nazis" is an example of anti-Semitism. The WCC says it "does not countenance equating Israel to Nazi Germany, neither in the training of participants in the EAPPI nor otherwise."

Yet in 2019, the pro-Israel watchdog NGO Monitor reported that WCC leadership and EAPPI volunteers had repeatedly made comparisons of Israeli actions to those of Nazi Germany in their advocacy sessions.

In 2012, Vivian Wineman, president of the U.K.'s Board of Deputies, said members of Jewish communities across the country had "suffered harassment and abuse at EAPPI meetings," and that the EAPPI "helped to create a climate of hostility towards Israel within the Church of England."

The WCC's Zoom event was reported last week in the Algemeiner by Dexter van Zile, the specialist in Christian affairs for the Committee for Accuracy in Middle East Reporting (CAMERA) and who has long charted the conflation of Christian anti-Semitism with anti-Israel incitement.

In a subsequent article this week, Van Zile reports that the WCC has now tried to distance itself from Chikane's remarks by claiming that he was from the African National Congress and therefore wasn't speaking on behalf of the WCC when he made his comments.

He wrote that theologian Gerald McDermott expressed strong disagreement with Chikane's statements and declared that he was "out of touch with the situation on the ground."

In such circumstances, that would seem to be a considerable understatement. The situation on the church's ground is that influential Christian organizations continue to pump out inflammatory falsehoods about Israel and Zionism which don't just demonize and delegitimize Israel but draw upon the church's own theology to demonize the Jewish people.

The most shocking aspect of this is that with just a handful of exceptions, the churches remain mute about it.

Church leaders usually flatly deny that Christian supersessionism has any contemporary resonance. Yet you don't have to scratch very hard below the surface of the anti-Israel utterances by Western church leaders to pick up the supersessionist allusions.

It's true that some of the most passionately pro-Israel people in the world today are Christians, in America and elsewhere. But these tend to be the biblically faithful. The obsessive animus against Israel and Zionism, along with its supersessionist underpinning, is mainly to be found among liberal Christians.

And their influence-through Christian NGOs and a wide range of other public and cultural institutions-is immense.

It's not just that they influence other Christians. Even in relatively godless places like today's Britain, the assumption that Christians stand for truth, justice and compassion means that even secular people tend to believe what they say. The pernicious falsehoods that such Christians pump out about Israel are therefore regarded as unchallengeably true.

Extreme as it was, Chikane's diatribe on Zoom illustrated an even more unpalatable state of affairs-the silent acquiescence of church leaders in the contemporary mutation of Christianity's own murderous history, and its virulent spread into the cultural arteries of the West.

Melanie Phillips, a British journalist, broadcaster and author, writes a weekly column for JNS. Currently a columnist for "The Times of London," her personal and political memoir, "Guardian Angel," has been published by Bombardier, which also published her first novel, "The Legacy." Go to melaniephillips.substack.com to access her work.