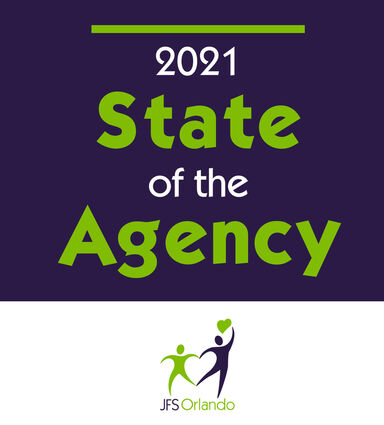 Flynn reviewed the work and accomplishments of the agency last year, including how its programs and services remained open, it began a new rental assistance program, and it helped more people in 2020 than in the last five years. With a look into the ongoing year, he listed some of JFS Orlando's goals for 2021, including maintaining and strengthening relationships and diversifying funding sources.

He also introduced plans to assist the Blue Card program of the JF&CS (Jewish Family & Career Services) in Atlanta, Ga., which provides assistance to needy Holocaust survivors. The JF&CS reached out to JFS Orlando because more than 15 clients served by Atlanta have moved to the Greater Orlando area in the last couple of years. Many have moved to Florida to live with children and grandchildren, but, unfortunately, it has left them without Blue Card program benefits since they now reside outside the jurisdiction of the JF&CS.

To watch a recording of JFS Orlando's 2021 State of the Agency meeting, visit http://www.JFSorlando.org/2021-state-of-the-agency.